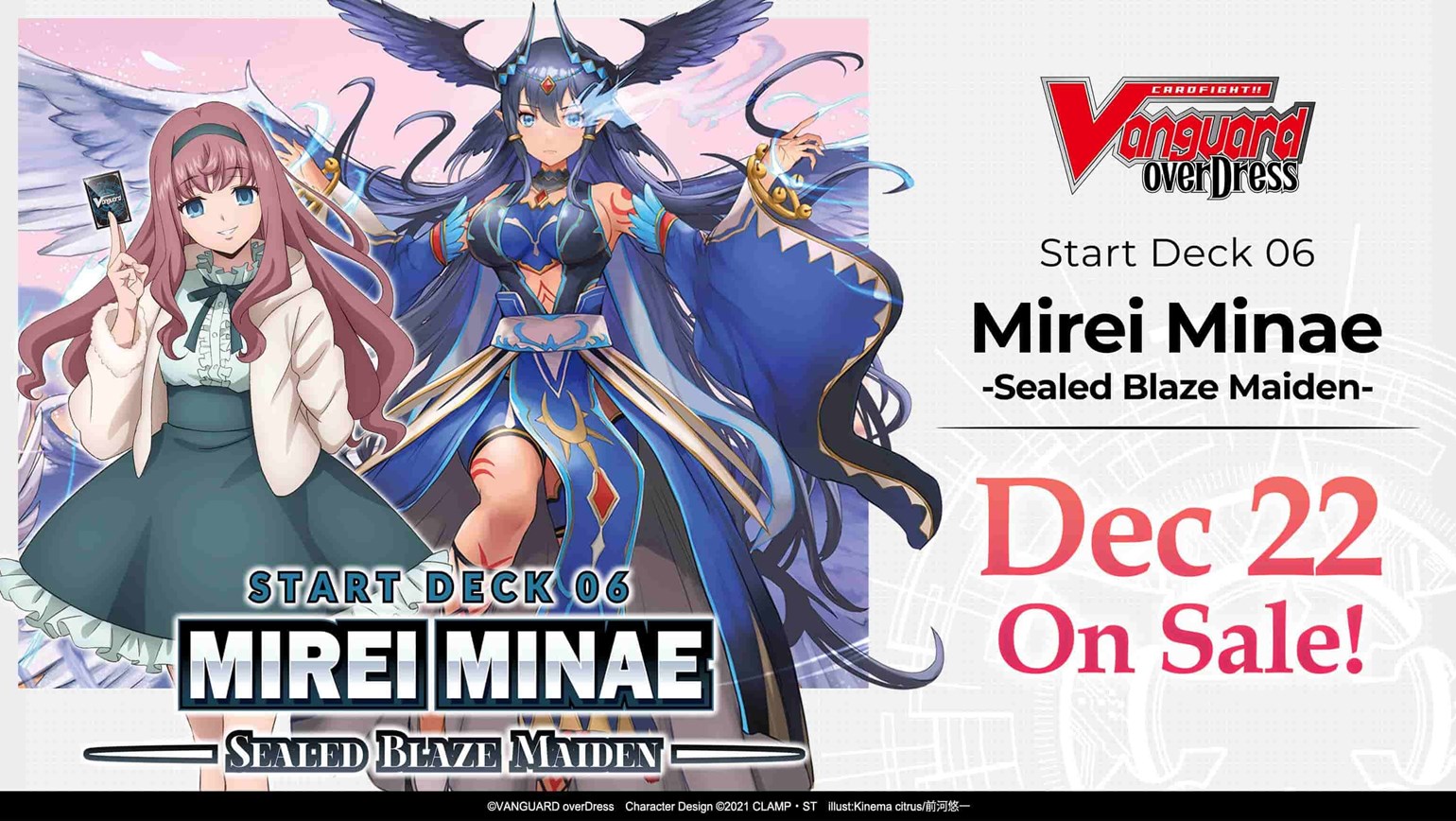 On December 22nd, we will be launching Mirei Minae -Sealed Blaze Maiden-, the sixth and latest Start Deck of the CARDFIGHT!! VANGUARD overDress series!

While it contains cards from the Dragon Empire like Start Deck 01: Yu-yu Kondo -Holy Dragon-, this constructed deck features a different aesthetic and play style from the other Dragon Empire decks!

Mirei Minae has been revealed for the second season of the CARDFIGHT!! VANGUARD overDress animation as a mysterious young woman who is crucial to the story. No spoilers will be provided here, so be sure to check out the animation on the Cardfight!! Vanguard Official YouTube channel (CARDFIGHTVanguard)!

Let’s take a look at some of the cards that she uses, including her ace unit, “Sealed Blaze Maiden, Bavsargra”! 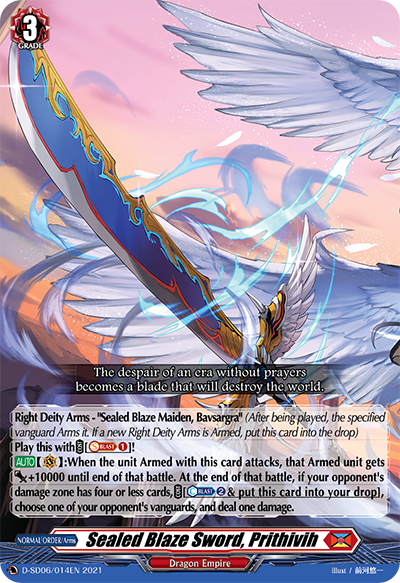 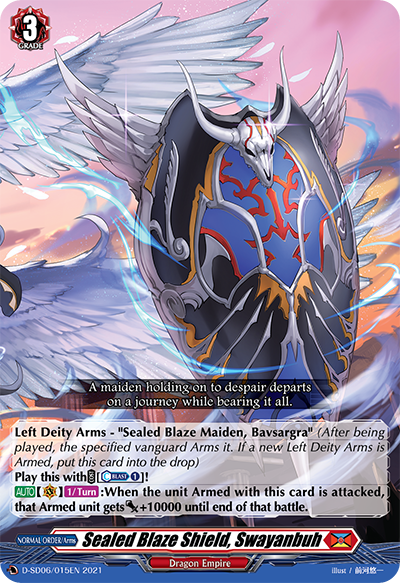 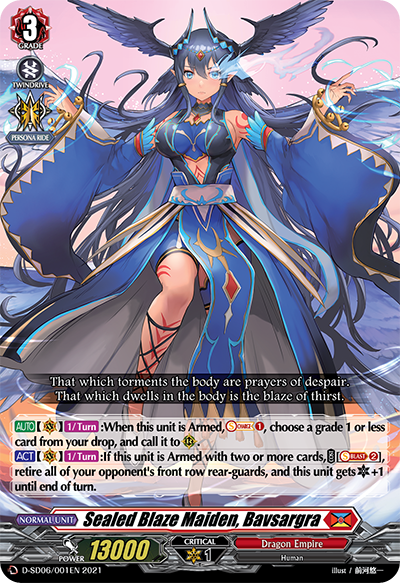 Equip the best Arms, and seal your victory in battle! Place these three cards together to form a beautiful illustration too!

“Sealed Blaze Sword, Prithivih” and “Sealed Blaze Shield, Swayanbuh” are a new type of Normal Order cards called Arms that go hand in hand with “Sealed Blaze Maiden, Bavsargra”. They each have unique abilities that greatly amplify the offensive and defensive capabilities of Bavsargra!

In addition, when “Sealed Blaze Maiden, Bavsargra” is Armed, you can call a grade 1 or less ally from your drop! Bavsargra reaches its peak performance when Armed with two or more cards, as it can retire the entire opponent’s front row and attack with an additional critical under its belt!

How do Arms work?

Arms is a new type of Order card and they are indicated with “NORMAL ORDER/Arms.” When played, they are placed on the vanguard circle, and up to two can be used at a time, with one on each side! If two Arms are on the field, both abilities can be displayed continuously!

At the same time, let’s have a look at the other cards in the ride line too! 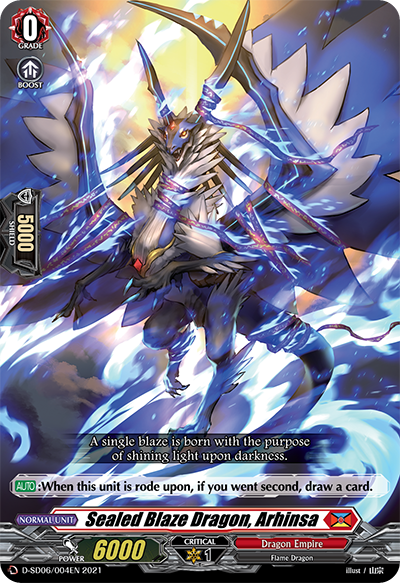 The First Vanguard that will be included in this Start Deck! 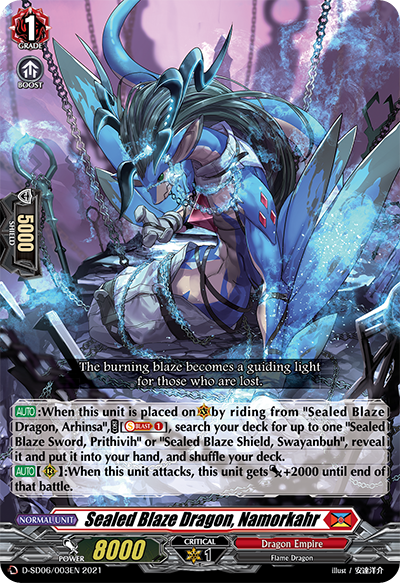 When it rides on "Sealed Blaze Dragon, Arhinsa," you can add “Sealed Blaze Sword, Prithivih” or “Sealed Blaze Shield, Swayanbuh” to hand! It is highly recommended to discard the obtained Arms card as cost when riding to the Halibadra vanguard, as you will be able to retrieve it easily with the latter ability!

On top of that, this unit gets a 2k power-up when it attacks! 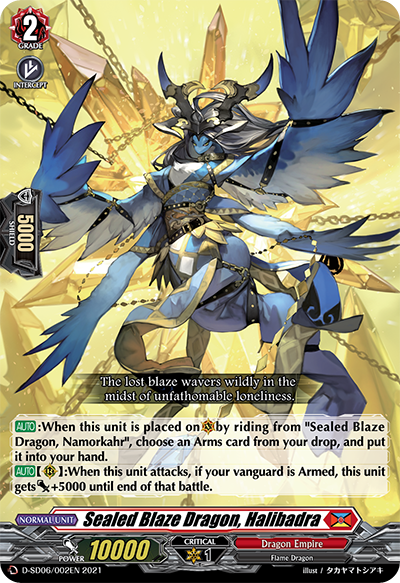 This card is indispensable in the Ride Line to secure the Arms required for “Sealed Blaze Maiden, Bavsargra” in the next turn.

In addition, when fighting alongside an Armed Bavsargra vanguard, it becomes a solid 15k attacker too!