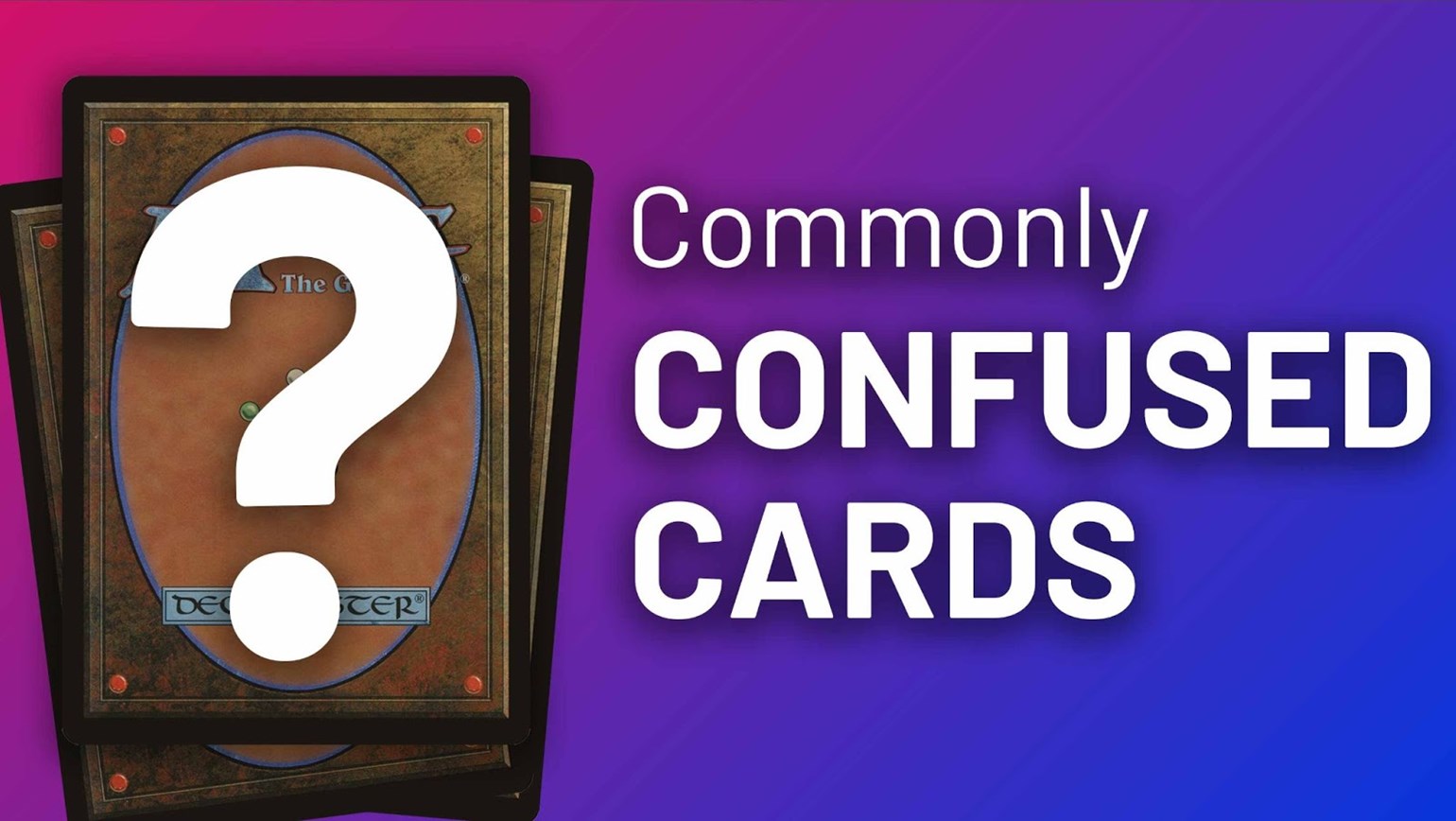 Magic: The Gathering has an extremely wide array of cards that make up the game. Two of these cards can be unique from one another, while others can have such miniscule differences that the untrained eye would not be able to tell the two apart. This article is an introductory piece to a series of guides meant to help train Magic enthusiasts on how to properly identify different versions of cards that may be easily confused with one another.

“Limited Edition” refers to the first Magic: The Gathering card set. In 1993, Limited Edition Alpha & Limited Edition Beta would premiere at separate times. Alpha premiered first at an Origins Game Fair in July 1993, Beta would be released in October 1993 with two notable cards added: Volcanic Island and Circle of Protection: Black. These cards were not included in the Limited Edition Alpha set because their artwork was not completed in time for printing. Alpha Cards have more steeply rounded corners than any of the Magic: The Gathering sets printed afterwards, making it easier to identify when lined up with another non-alpha card. 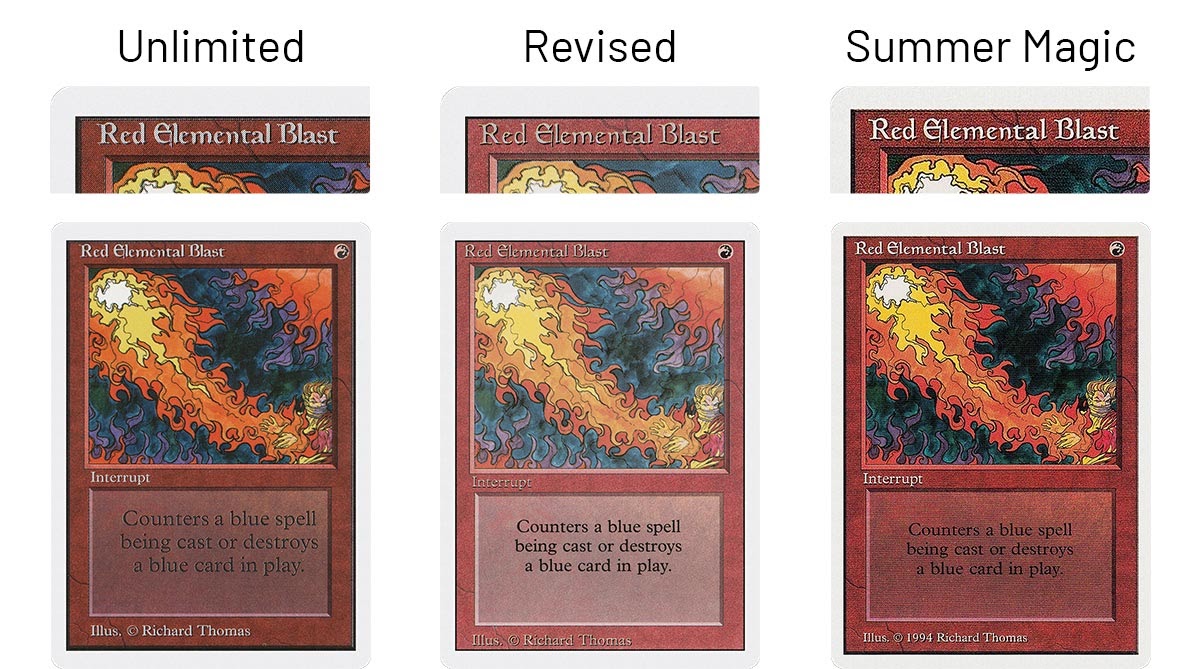 Fourth Edition and Fifth Edition were the next Core Sets printed after Revised Edition. Fourth Edition brought back the bevel on the outer part of the card coloring, and has a 1995 Copyright Date in the bottom left corner. Alternate Fourth Edition is a unique printing of Fourth Edition that was ultimately meant to be destroyed. However, some of these unique versions of these cards made it into circulation via Starter Decks. 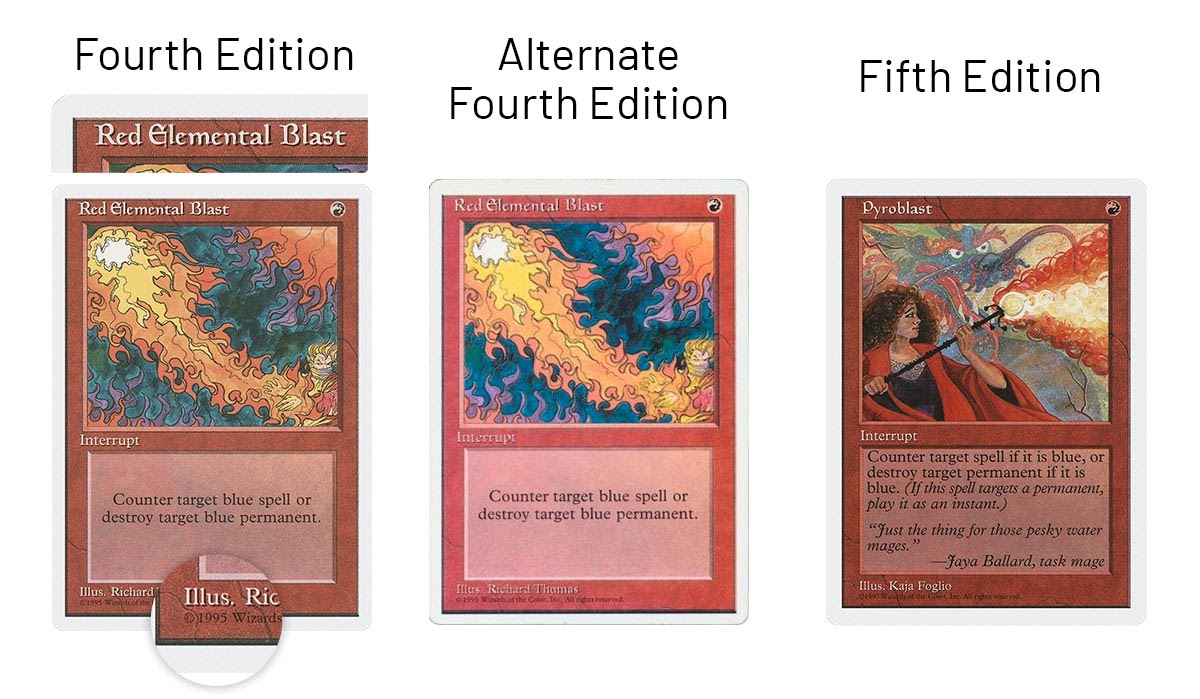 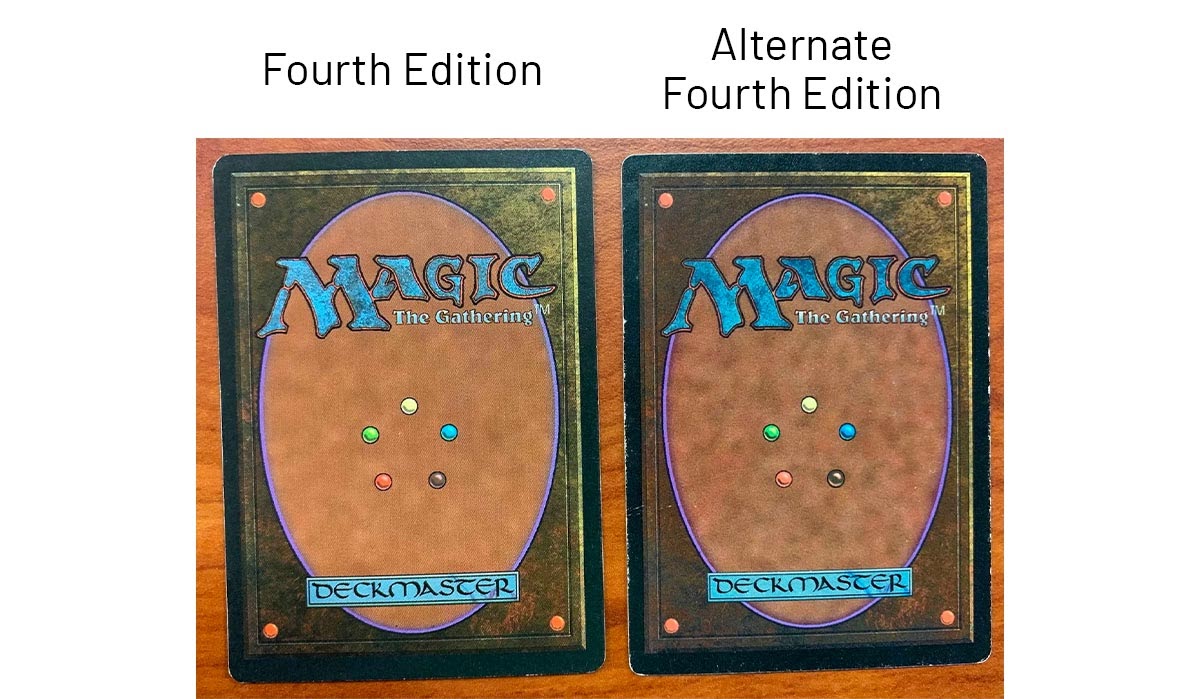 Chronicles is a reprint set that has cards from the sets Arabian Nights, Antiquities, Legends, and The Dark. The difference between these cards and their original printing is that they are white-bordered. Renaissance is a set very similar to Chronicles, except it was black-bordered instead of white bordered and was only released in German, French, and Italian. The German and French versions of Renaissance have reprints from the same sets as Chronicles, but also have two additional cards from Unlimited that were not printed in Chronicles. These cards are Ironclaw Orcs & Twiddle. The German and French versions of this set contain the 122 cards that were printed in Fourth Edition but did not have original printings in these two languages. That is why Renaissance is a black-bordered set as opposed to Chronicles. The Italian version of Renaissance only has 60 cards in the set, as Italian had the sets Legends and The Dark already printed. Italian Renaissance only has cards reprinted from Arabian Nights, Antiquities, and Unlimited. The Italian version of Renaissance is also black-bordered.

Anthologies is a box set that includes two preconstructed, white-bordered theme decks consisting of cards ranging from Limited Edition Alpha to Urza’s Saga. These cards have a Copyright of 1993-1998 with no Collector’s Number attached. Battle Royale is also a box set, but includes four 40-card preconstructed decks. These cards are white-bordered reprints of previously printed cards, and have a copyright of 1993 - 1999.

The Counterspell on the left is a Battle Royale version whereas the Counterspell on the right is a Classic Sixth Edition version. The main difference is that the Classic Sixth Edition version has a Collector’s Number located on the Copyright Date line. The Battle Royale version does not have a Collector’s Number printed onto the card.

The Cuombajj Witches on the left is an Anthologies version of the card, whereas the card on the right is the original version printed in Arabian Nights. The Anthologies has an updated Copyright Date line and also has a white border. The Arabian Nights printing is black-bordered.

Magic cards can be tricky to identify, but knowing what to look for when observing a card is all the difference in being able to identify it correctly. Check out the next Commonly Confused Cards post where we identify slight variations in some singles that could make a huge difference in your profit!

Antonio Espada works in the TCGplayer Fulfillment Center, and works hard to create the best experience for buyers and sellers in the gaming industry. In his time away from TCGplayer, you can find him working with the BeardFishGaming Inventory, or gaming with his family and friends.