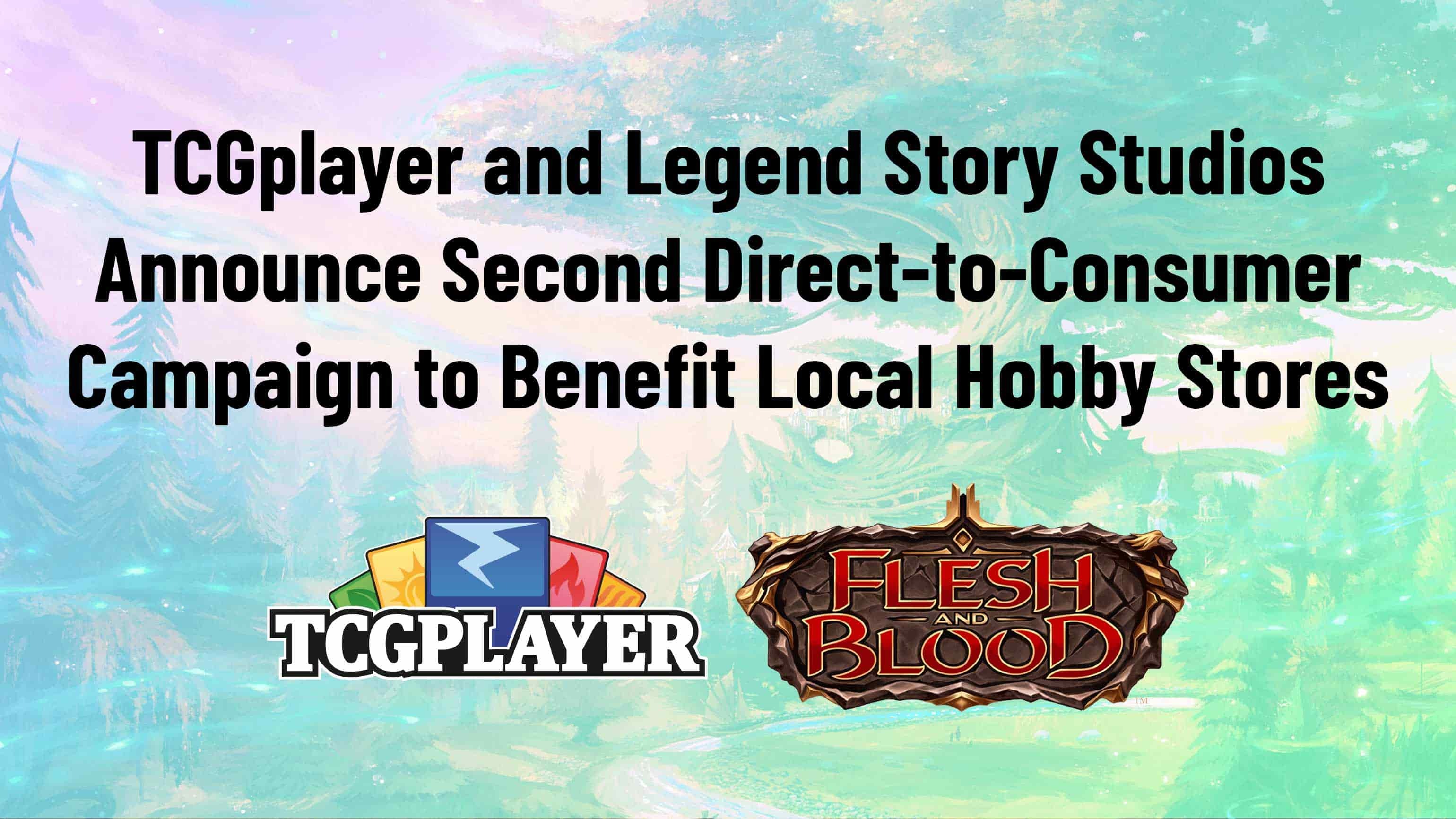 SYRACUSE, N.Y., September 13, 2021 – TCGplayer, the leading technology platform for the collectibles industry and operator of the largest online marketplace for trading card games, today announced a new direct-to-consumer campaign with Legend Story Studios for the benefit of local hobby stores. As part of the campaign, Legend Story Studios has released a limited-supply of first-edition and exclusive Flesh and Blood products on the TCGplayer marketplace.

The promotion builds on the success of the duo’s first-ever direct-to-consumer campaign, which as previously announced, awarded $75,000 to participating local hobby stores. In this new Tales of Aria themed collaboration, Legend Story Studios and TCGplayer have again agreed to credit each bundle sale to a participating local hobby store. Additionally, TCGplayer will facilitate the bundle’s marketing, listing, fulfillment, shipping and customer service on behalf of Legend Story Studios.

"Local hobby shops are the foundation of our community, and TCGplayer is constantly thinking of new ways to guarantee these small businesses have the resources they need to succeed in an ever-evolving industry. I am delighted to partner with Legend Story Studios on a direct-to-consumer campaign that once again advances this important objective,” said Chedy Hampson, Founder & CEO of TCGplayer. “Together, we further our commitment to brick-and-mortar shops — keeping them connected to product sales — while bringing limited-edition and exclusive Flesh and Blood products to fans across the TCGplayer marketplace. It’s truly something special.”

“When we thought about the launch of Flesh and Blood’s upcoming Tales of Aria set, partnering with TCGplayer was a no brainer,” said James White, Founder & CEO of Legend Story Studios. “With TCGplayer, we’ve developed an innovative way to support the local game store community across the U.S., and achieve our mission of bringing people together through the common language of playing great games. We are thrilled to build on the success of the Monarch campaign and bring something truly revolutionary to the TCGplayer marketplace. We look forward to growing our strong partnership in the months to come.

As part of the direct-to-consumer campaign, TCGplayer and Legend Story Studios have created the TCGplayer Tales of Aria Collector’s Bundle, which comprises a first-edition booster box, three Tales of Aria Blitz Decks, and a limited edition playmat and collector’s certificate – exclusive to TCGplayer. The bundle will be available for sale on the TCGplayer marketplace today at 12:00 pm ET, ahead of the official set launch later this month.

About Legend Story Studios
Legend Story Studios is an independent game design and publishing company based in Auckland, New Zealand. They design and publish Flesh and Blood, which spent seven years in development before its worldwide debut in October 2019, with the release of Welcome to Rathe. Flesh and Blood challenges the fundamental laws of TCG design through a unique resource system and innovative combat dynamic, that has players engaged in full powered combat from the first turn of the game and fatiguing as the battle progresses.

About TCGplayer
TCGplayer is the leading technology platform for the collectibles industry. Founded as a digital media platform within the collectible hobby space, the Company has grown from its initial roots working inside Syracuse-based hobby stores selling comic books, sports cards, CDs, collectible cards, action figures, and tabletop games into an expansive eCommerce marketplace. TCGplayer develops applications and technologies that are revolutionizing the collectibles marketplace by connecting thousands of hobby and collectibles businesses with customers around the globe. The Company's ecommerce and data management tools power sales through physical stores, websites, mobile apps and the TCGplayer Marketplace. TCGplayer prides itself on creating a culture that fosters camaraderie, embraces diversity, and exudes passion and provides stock options to all of its employees. The Company has been ranked amongst New York State's 50 best employers and Fortune.com's top 100 companies for women in the U.S and certified a Great Place to Work by our employees five years in a row.