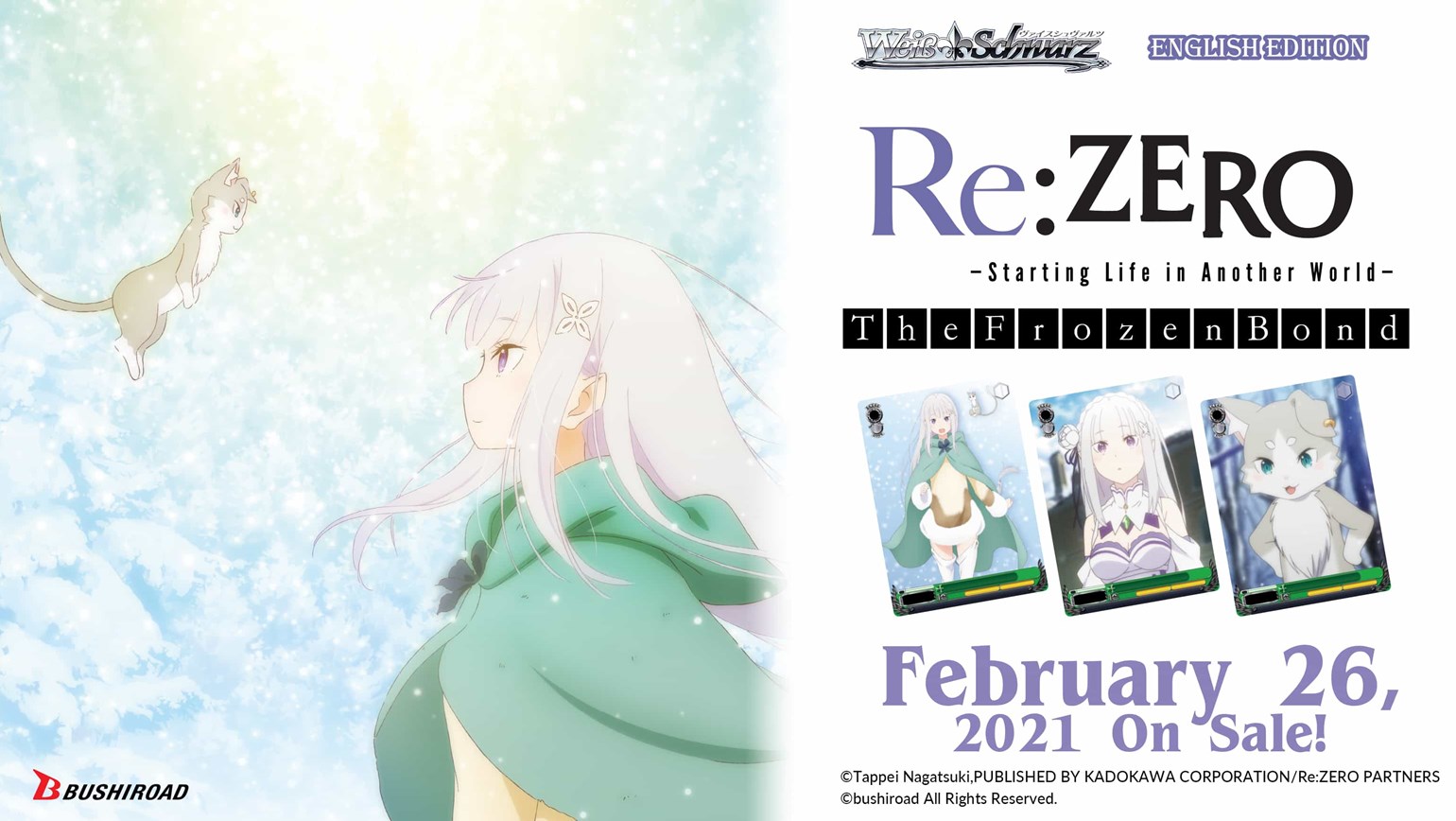 On February 26th, the popular title Re:ZERO -Starting Life in Another World- returns to Weiss Schwarz English Edition with its second OVA, Re:ZERO -Starting Life in Another World- The Frozen Bond! Unlike previous releases, this extra booster focuses on the events that had taken place before the main heroine Emilia met Subaru and company – her troubled past and first encounter with Puck.

In addition to cards which synergize well with existing Emilia-centric decks, check out the cards available in this product that give a lift to your game!

After the defeat of Melaquera, Emilia forms a contract with Puck and together, the two become a force to be reckoned with, as illustrated by their strong 3/2 CX Combo, Contractor and Spirit, Emilia & Puck and their climax card, The Road Ahead for the Two. 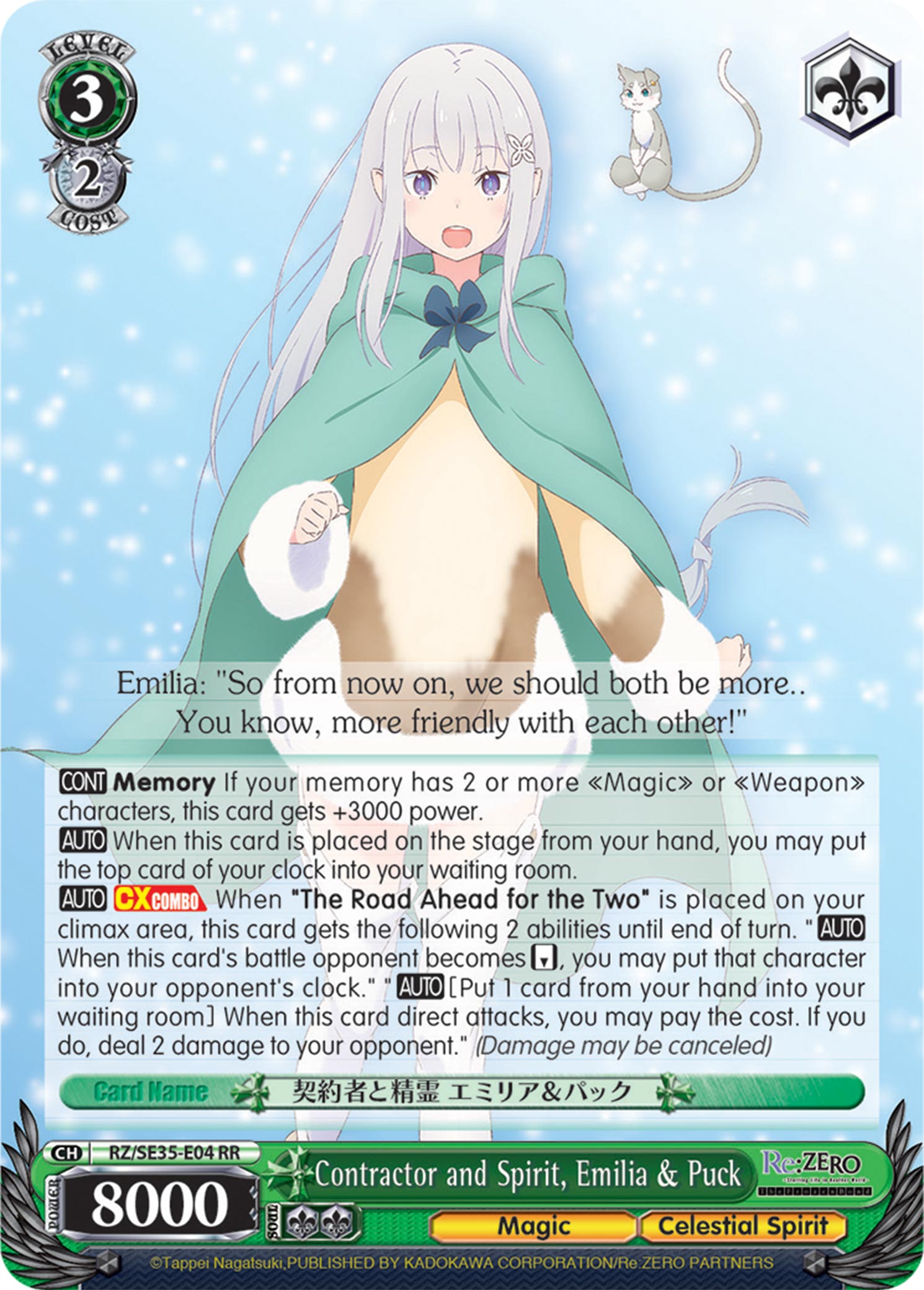 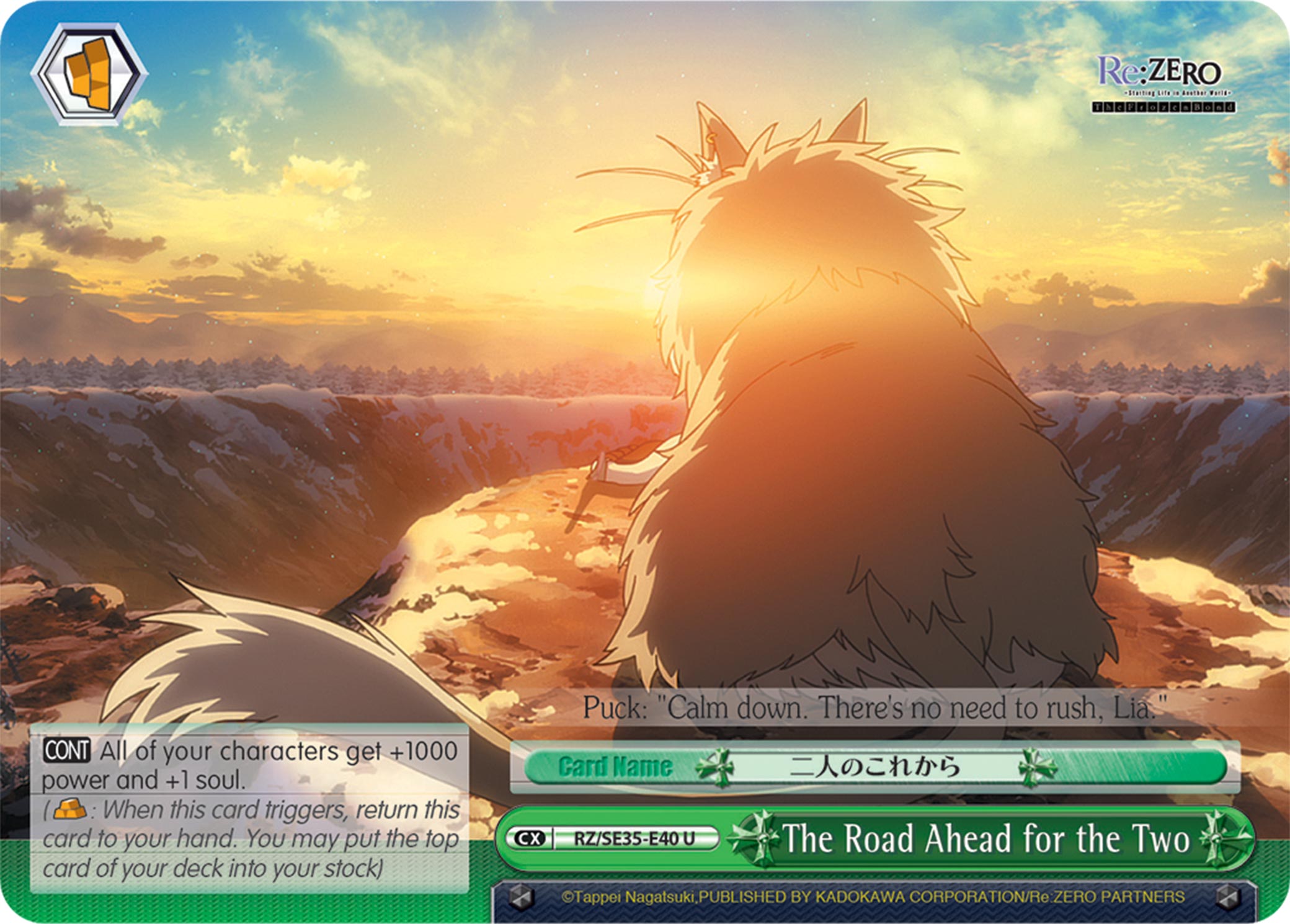 When there are 2 or more Magic or Weapon characters in a player’s memory, their character card gets a power bump of +3000 while healing 1 damage, by the effects of its first two abilities.
With the first AUTO ability gained via their CX Combo, you can put their opponent character into your opponent’s clock when the latter gets defeated in battle – a guaranteed point of damage!
In addition, you can also deal 2 additional damage when the card directly attacks, by the effect of its second AUTO ability in the CX Combo.

Introducing the new character, Melaquera who appeared in the second OVA. As a fire spirit with immense powers, he is a mighty contender in any battle as exemplified by his 3/2 CX Combo, “Mediator” Melaquera and All-Consuming Flames. 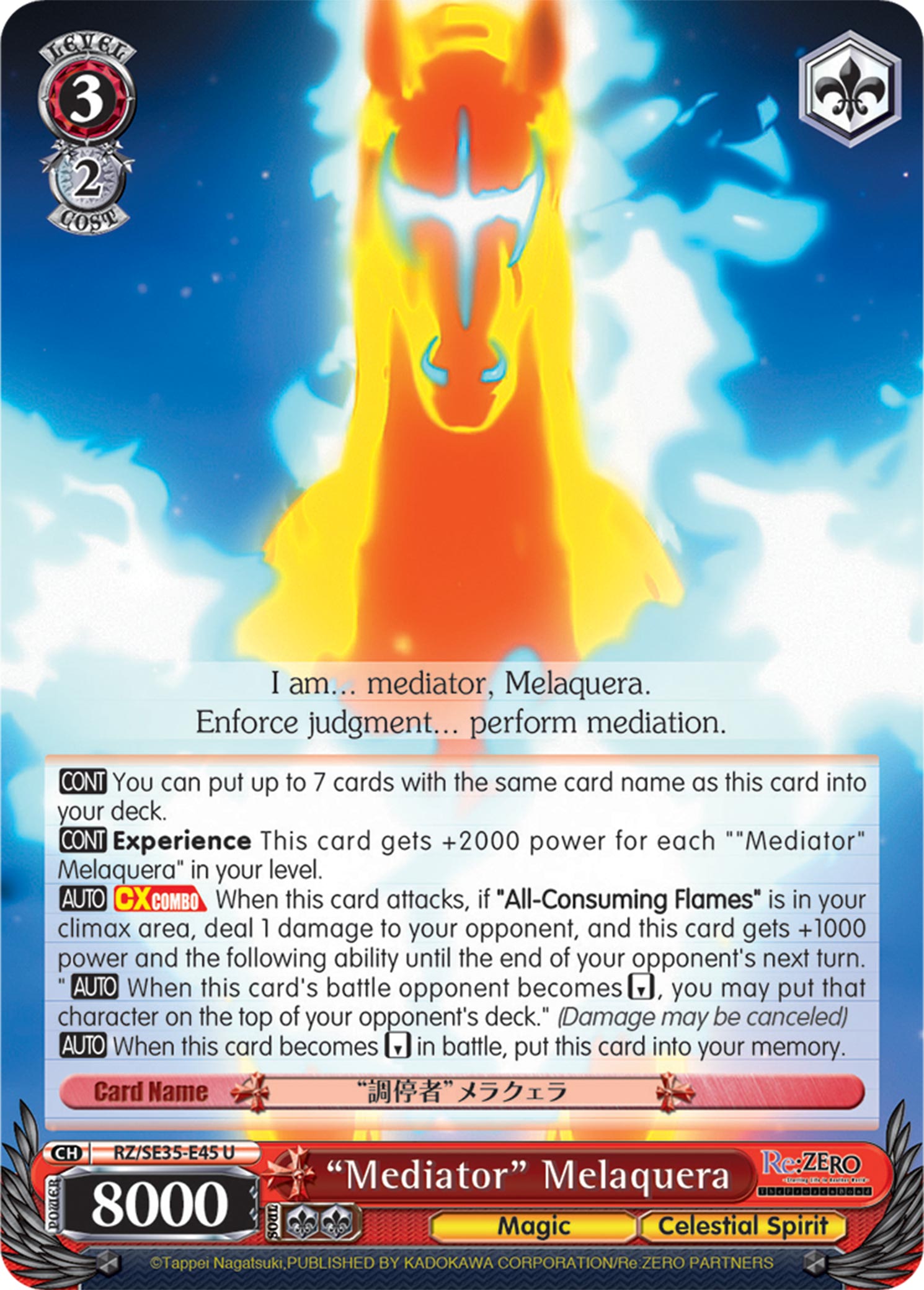 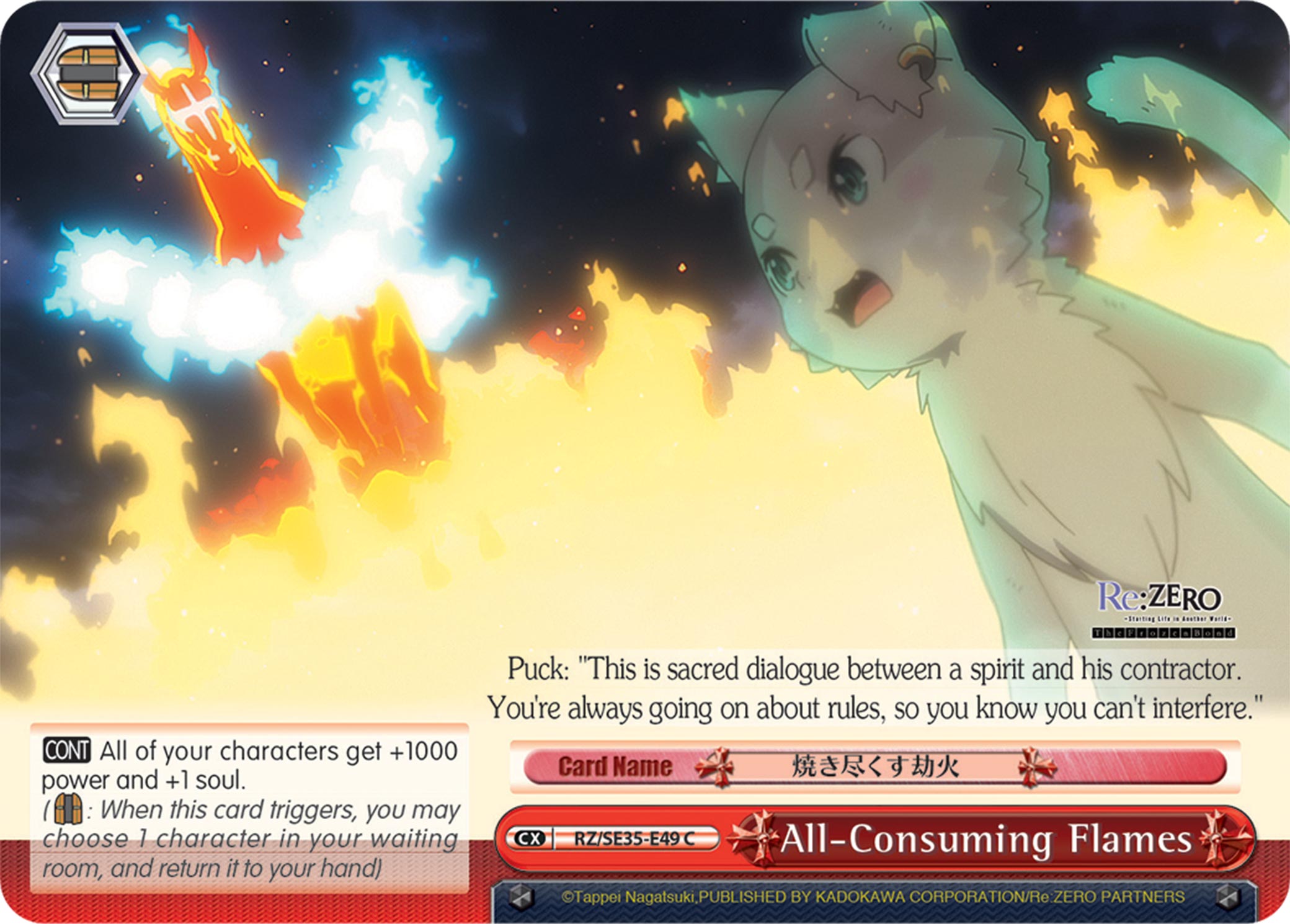 Unlike other cards in Weiss Schwarz which are allowed a maximum of 4 copies in a deck, you can put up to 7 copies of “Mediator” Melaquera character cards into your deck, in a setup to exploit the full potential of its second CONT ability.

With the effects gained via his CX Combo, he is able to deal an additional damage, coupled with a further boost of +2000 power, including that from the climax card, All Consuming Flames. On top of that, he also gets the following ability until the end of the opponent’s next turn. When his battle opponent gets defeated, you can place that character on top of your opponent’s deck, thereby preventing them from drawing a new character to attack with.

Fans of the half-demon twin maids at Roswaal’s Mansion can look forward to their character cards, Ram in a Hakama and Rem in a Hakama. 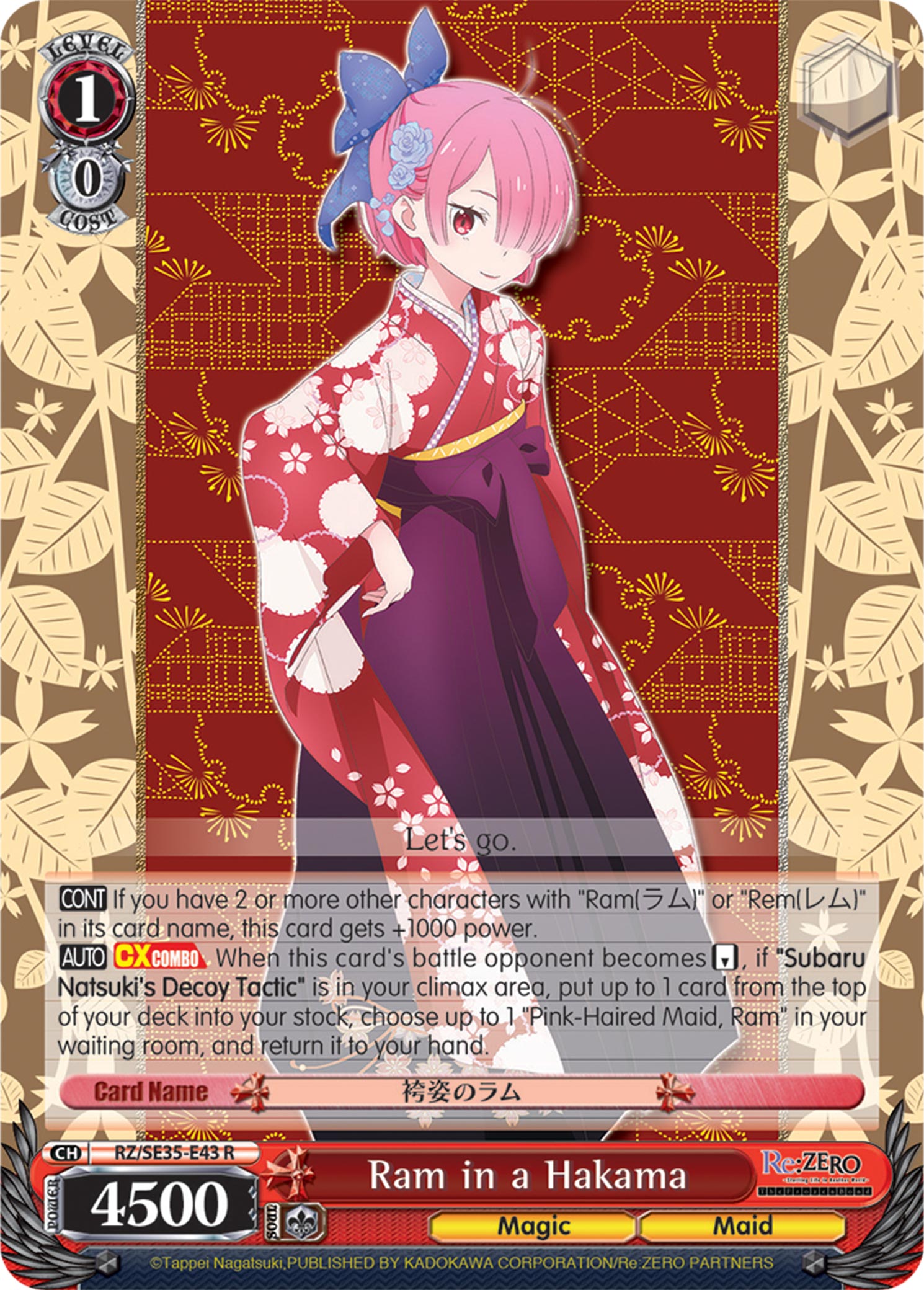 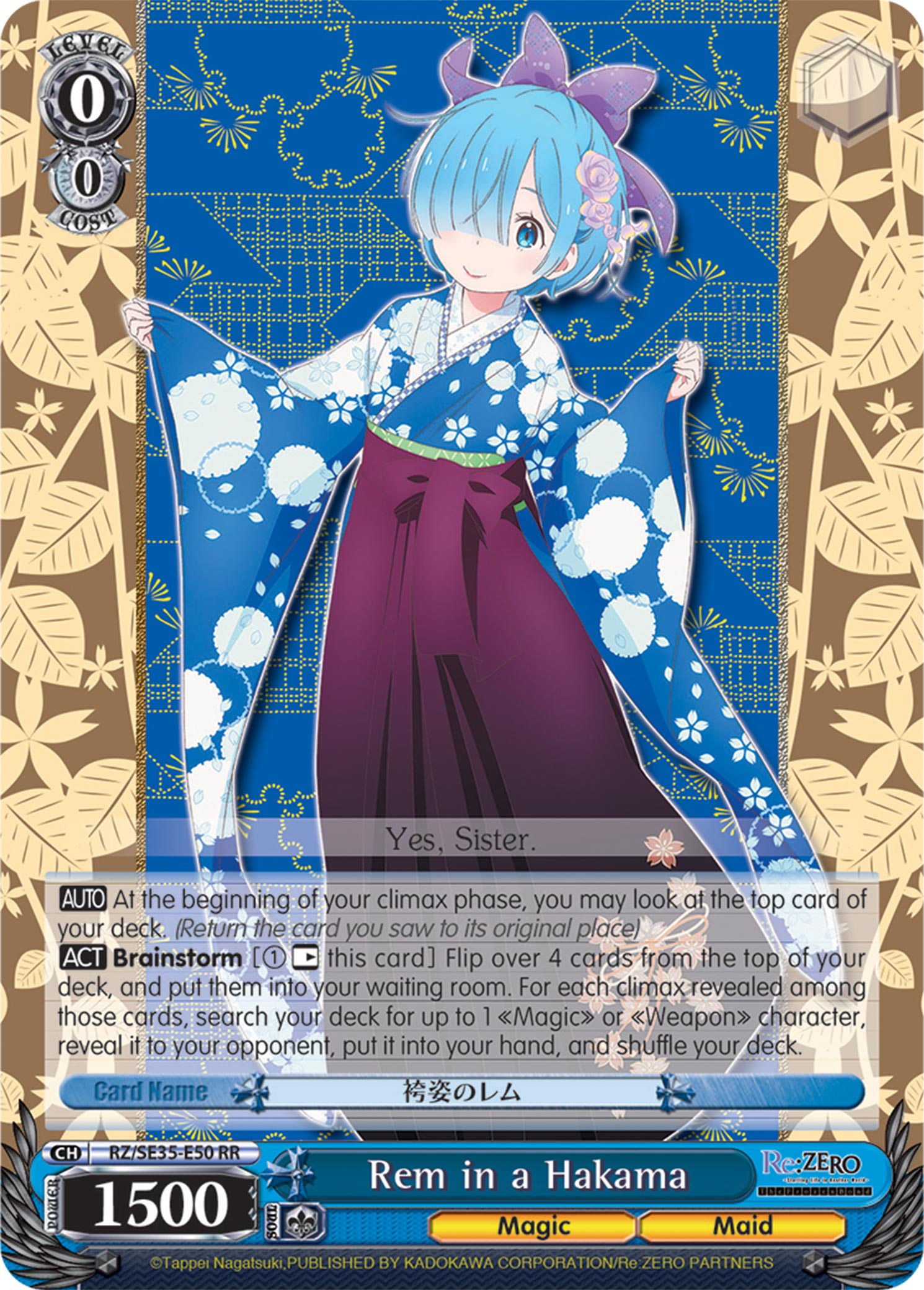 Ram in a Hakama works in tandem with cards from the previous Re:ZERO -Starting Life in Another World- release - her CX Combo, Subaru Natsuki’s Decoy Tactic to have the strong 3/2 CX Combo, Pink-Haired Maid returned from the waiting room to hand at no cost!

The Brainstorm ability on Rem in a Hakama allows you to search up to 4 Magic or Weapon characters from your deck, depending on the number of climaxes you reveal from the top of your deck.