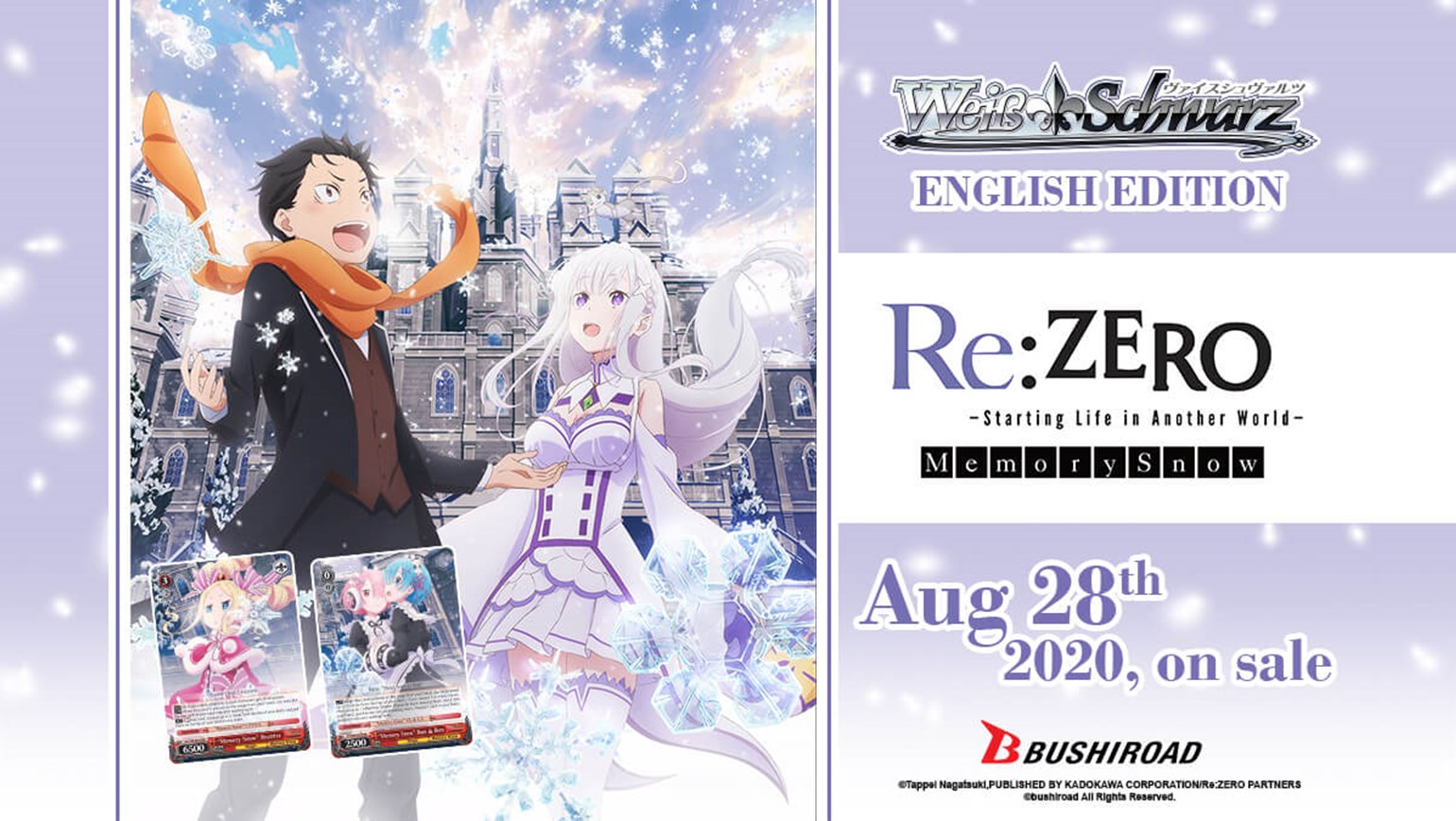 On August 28th, Re:ZERO -Starting Life in Another World- returns to the Weiß Schwarz stage with the release of its first OVA, Re:ZERO -Starting Life in Another World- Memory Snow! Continuing the popularity of its first anime season, this booster pack features the protagonist, Subaru, and his friends, Emilia, Rem and more. In addition, there are new characters such as Petra and other children from the Irlam village.

Check out these cards that work in synergy with one another to generate handy effects! 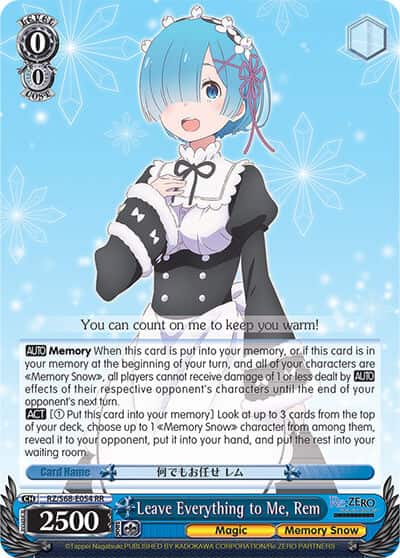 Leave Everything to Me, Rem

By the effect of its AUTO ability, both players cannot receive one damage or less dealt by the AUTO effects of their respective opponents’ characters when you place it into your memory.

With its ACT ability, you can dig up to three cards into your deck to search for a Memory Snow character to add to your hand.

It is also one of the crucial cards in this product as there are several cards that require at least one to two copies of it to be in a player’s memory before certain effects can be performed.

For instance, if Leave Everything to Me, Rem is your memory, the God’s Vantage Point, Ram character card gets a neat boost of +2000 power through its CONT ability. When there are two or more copies of it in your memory, you can also play The World Reflected in Her Eyes, Emilia character card earlier in the game at Level 2. 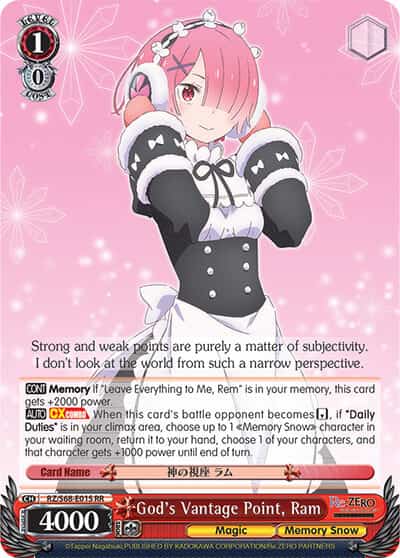 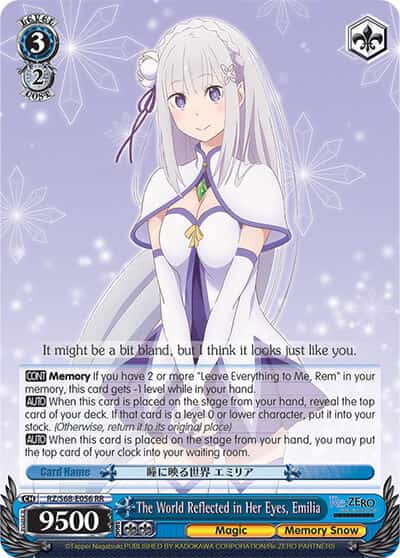 Through its AUTO ability, you can search your deck for up to one Memory Snow character when it gets defeated in battle, by paying the cost.

Similar to Leave Everything to Me, Rem, there are a number of cards that require one or more copies of it to be in your memory before certain effects can be performed.

If you have Snow Bunny in your memory, the Snow Bunny and Petra character card gets a considerable boost of +2500 power. When “Memory Snow” Subaru attacks and you have four or more copies of the former in your memory, you can choose one of your characters on the field and that character gets a hefty boost of +3000 power and +1 soul until the end of your turn. 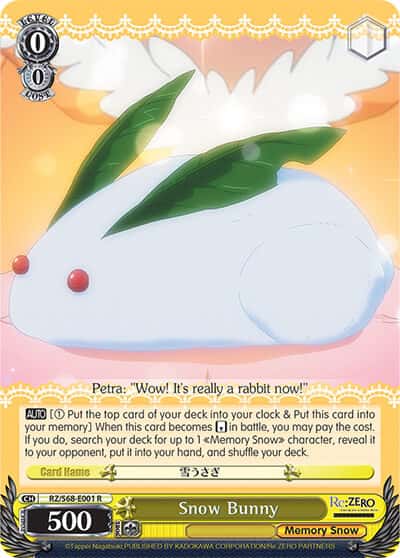 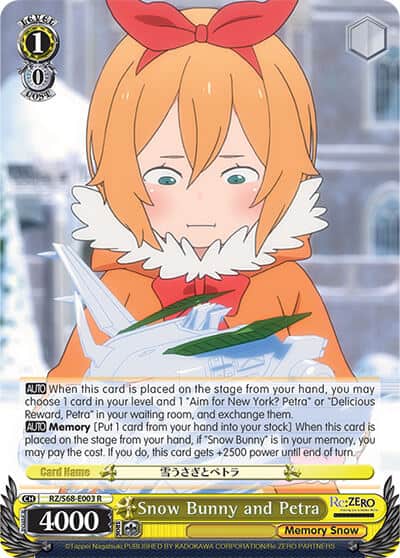 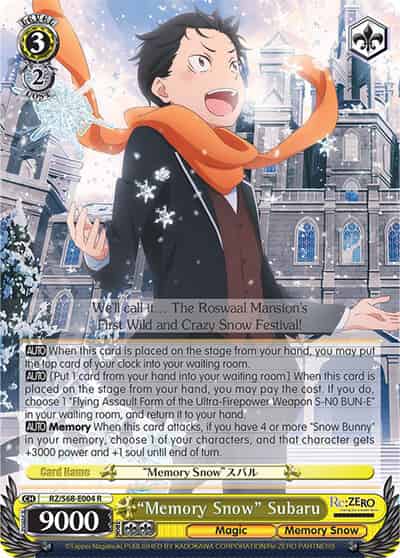 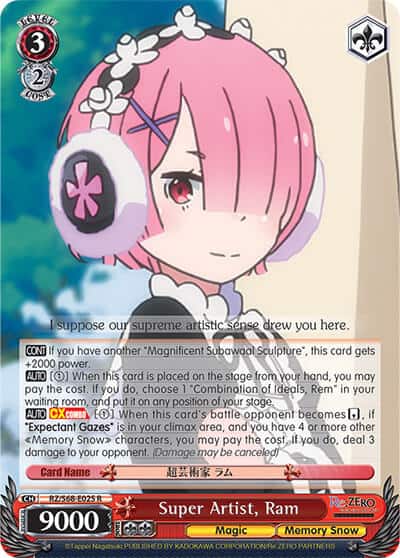 For a start, if you have another Magnificent Subawaal Sculpture, it gets a neat boost of +2000 power through its CONT ability.

With its AUTO ability, you can have Combination of Ideals, Rem returned to your hand from your waiting room which in turn, works with Magnificent Subawaal Sculpture to give you an additional chance of dealing one damage to your opponent when the damage dealt by the former is canceled, by paying the cost. 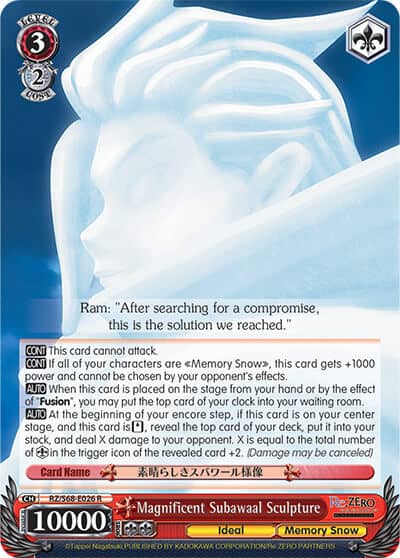 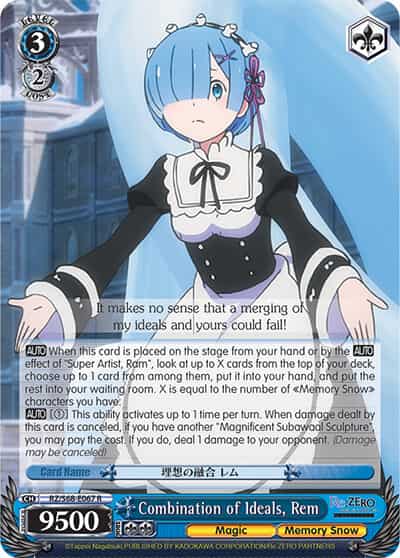 If you have Expectant Gazes in your climax area when its battle opponent is defeated, and you have four or more Memory Snow characters on the field, you can deal three additional damage to your opponent. At level three, Super Artist, Ram works with other cards to become a potential game-finisher that brings you victory! 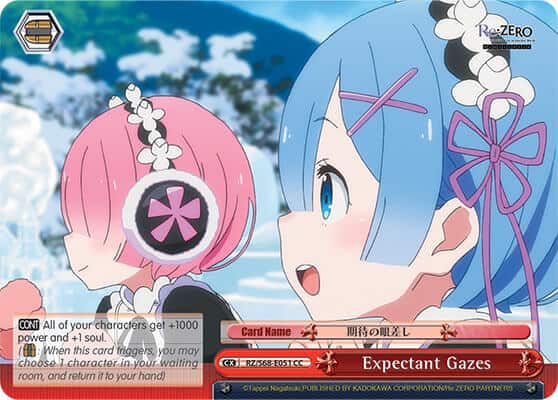