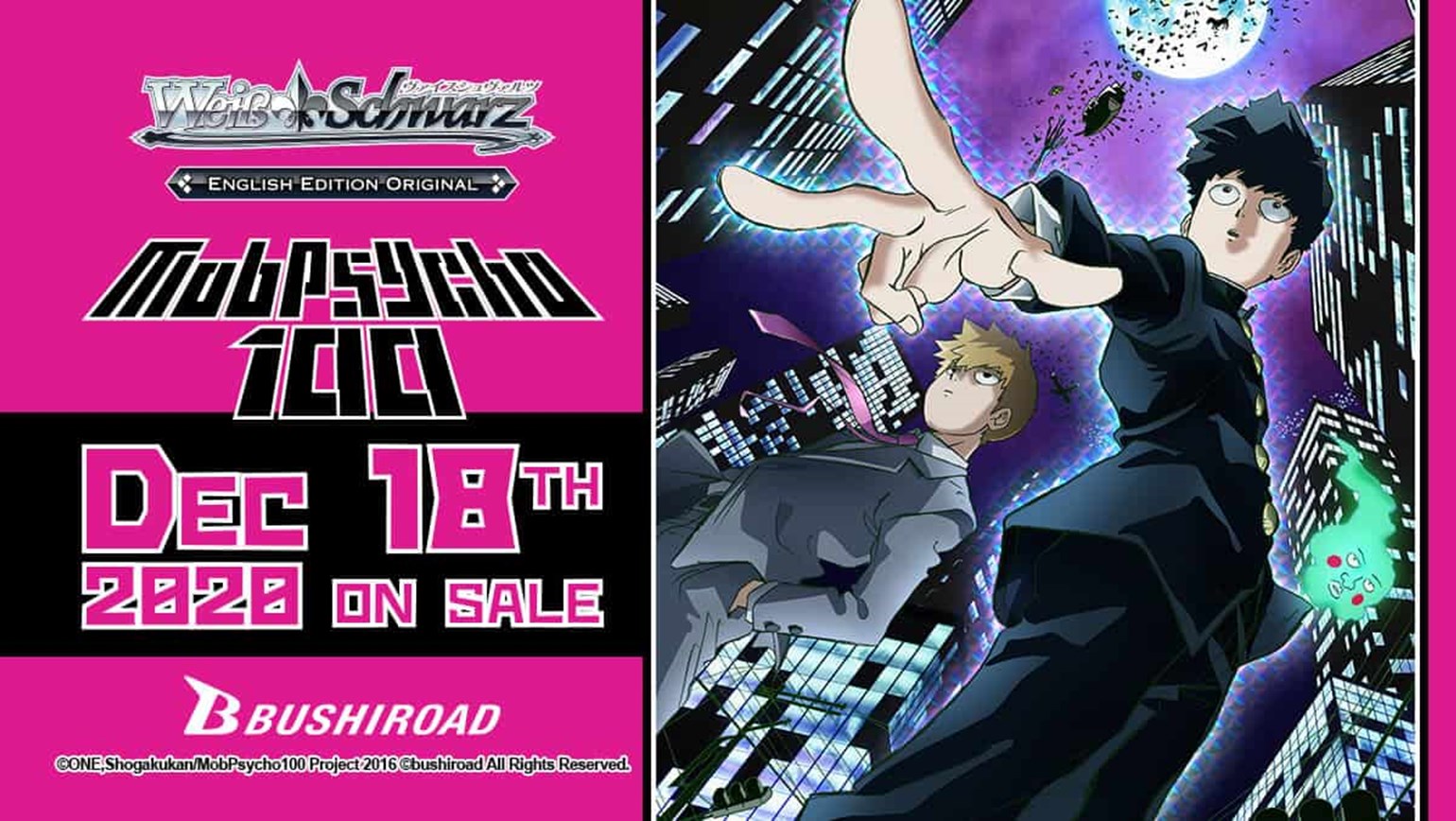 Mark your calendars as another English Original title, Mob Psycho 100 joins the Weiss Schwarz stage with the release of a Trial Deck+, Booster Pack and Supply Set on December 18th! Based on a Japanese manga series that was adapted into an anime series which ran for 2 seasons, this set features the protagonist Shigeo MOB Kageyama, his master Arataka Reigen as well as other memorable characters such as Dimple, Ritsu Kageyama and Teruki Hanazawa.

Check out the cards that work in tandem with one another to generate powerful effects!

When paired together, the character cards Reigen Arataka and MOB: Gratitude Towards His Master synergize with their climax card, It’s Okay to Run Away! to become a powerful game-finisher! 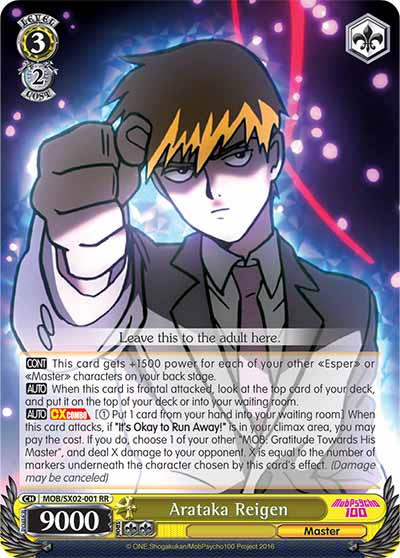 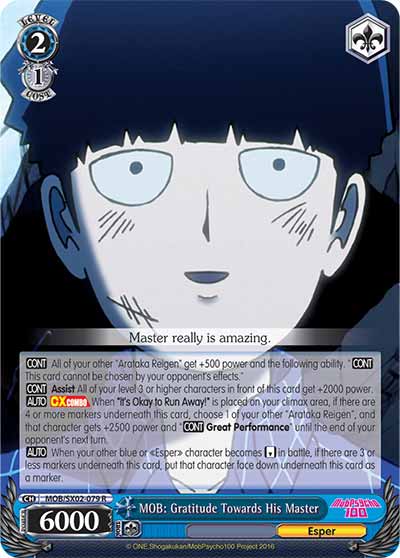 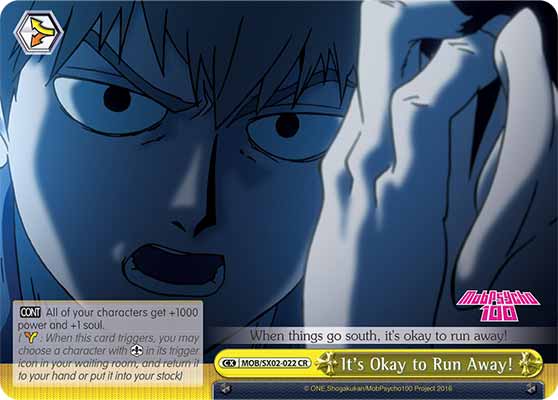 On his own, Arataka becomes stronger with a hefty boost of +3000 power. With MOB behind him on the field and the extra boost from their climax card, he gets a whopping +6500 power! Borrowing strength from MOB, he is capable of unleashing a massive number of damage, depending on the number of markers underneath MOB.

Meanwhile, MOB grows from strength to strength when other characters on the field are defeated and placed as markers underneath his card, in a setup to eventually aid Arakata to triumph!

A memorable antagonist, Dimple is an evil spirit who founded the LOL cult in his desire to be worshipped as a god. The booster pack features several (LOL) cards that work in synergy with one another.

For a start, check out this Dimple: (LOL) Cult Leader character card and his climax card, What a Wonderful Smile! 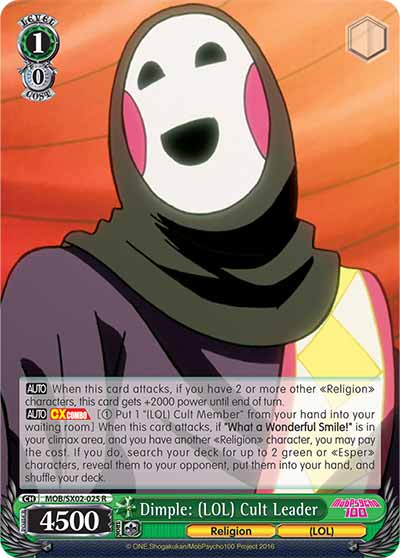 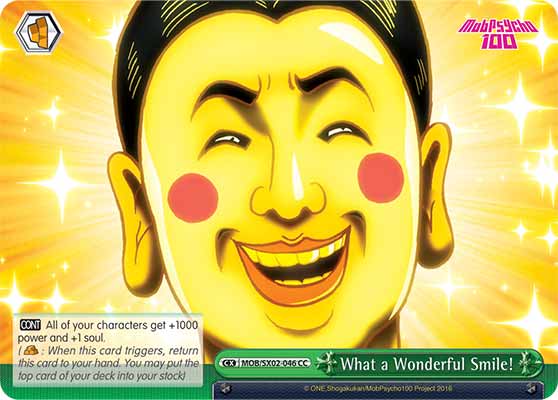 With 2 or more other Religion characters on the field, Dimple gains a neat boost of +2000 power. Add in the extra boost from his climax card and that is a hefty boost of +3000 power in total! With the ability gained from his CX Combo, you can search your deck for up to 2 characters, taking away the need to look for a character to attack with on your next turn. 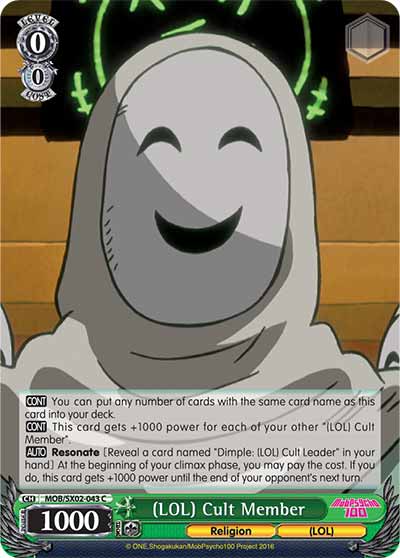 Next, unlike other cards in Weiss Schwarz which are allowed a maximum of 4 copies in a deck, you can put any number of (LOL) Cult Member character cards into your deck by the effect of its first CONT ability.

Play 5 copies of it on the field in the early game and they become a mighty army with 5000 power each. Throw in the additional boost of +1000 power by revealing a Dimple: (LOL) Cult Leader and they stand strong at 6000 power each!

Having trouble fishing them out from your deck to play on the field? This is easily solved with the aid from a handy event card, (LOL) Mask which allows you to search your deck for up to 2 LOL characters, including (LOL) Cult Member. 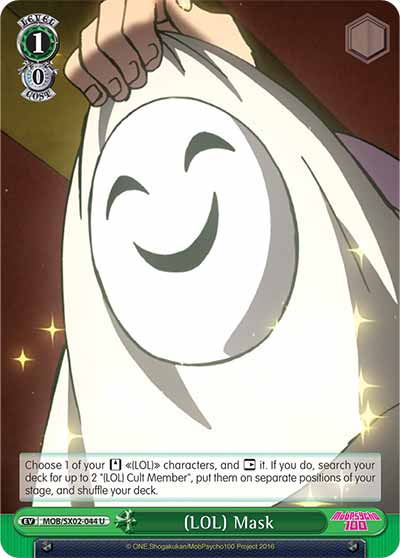 Known for unleashing massive power when his emotions hits 100%, a Mob Psycho 100 set would not be complete without a strong 3/2 CX combo, featuring the MOB: Explosion character card and his climax card, 100%! 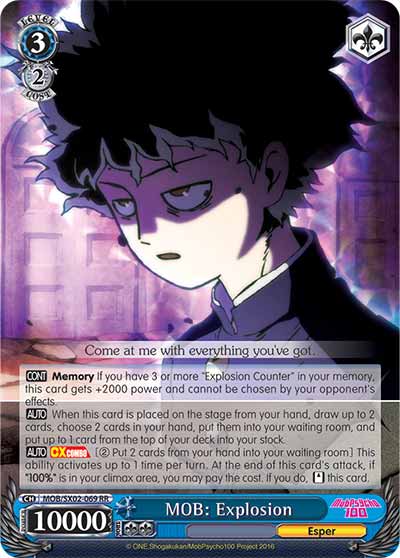 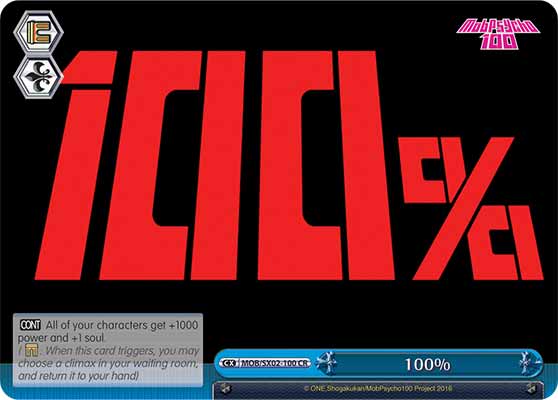 As his emotions surge, MOB gets stronger with a neat boost of +2000 power. Add in the extra boost from his climax card and that is a hefty boost of +3000 power in total! Through his first AUTO ability, you can replace up to 2 cards in your hand with those from the top of your deck and add 1 to your stock. With the ability gained from his CX combo, he can attack the opponent’s characters twice in the same turn, upon paying the cost.