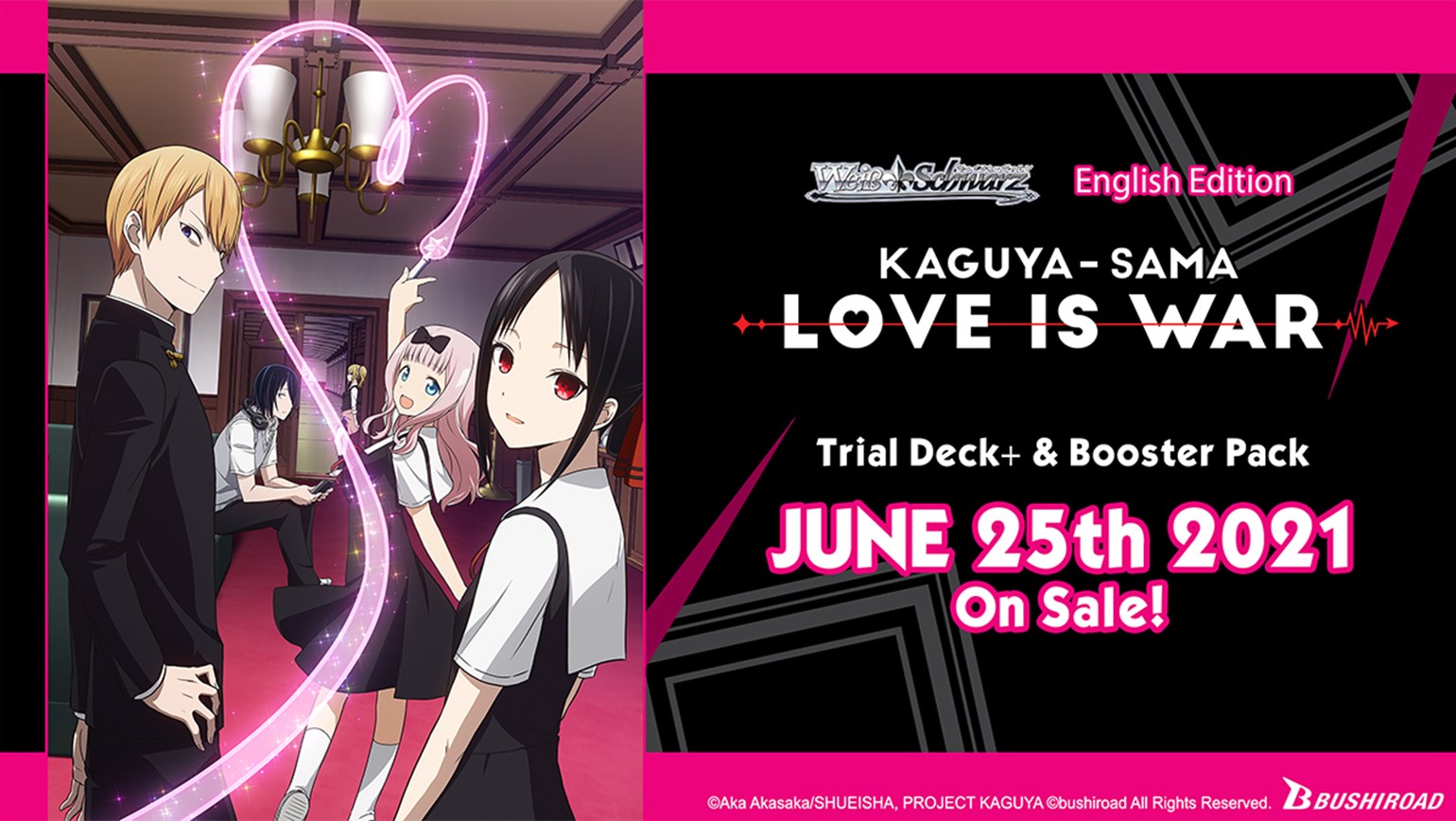 It is going to be a romantic battle of the brains as another new title, Kaguya-sama: Love is War joins the Weiss Schwarz English Edition lineup, with the release of a Trial Deck+ and Booster Pack at the end of June!

Originally a Japanese manga that was adapted into various media which includes an OVA set to release this year and a third anime season in the works, this set features the titular character, Kaguya Shinomiya, alongside other main characters, Miyuki Shirogane, Chika Fujiwara, Yu Ishigami and Ai Hayasaka.

Check out the awesome cards that can be found in this set!

A friend of Kaguya since middle school, Chika is a carefree and happy-go-lucky high-school student who often schemes to beat her opponent in games, as recreated in her nifty CX Combo, Serious Showdown Between Geniuses, Chika and Yo! Man♪. 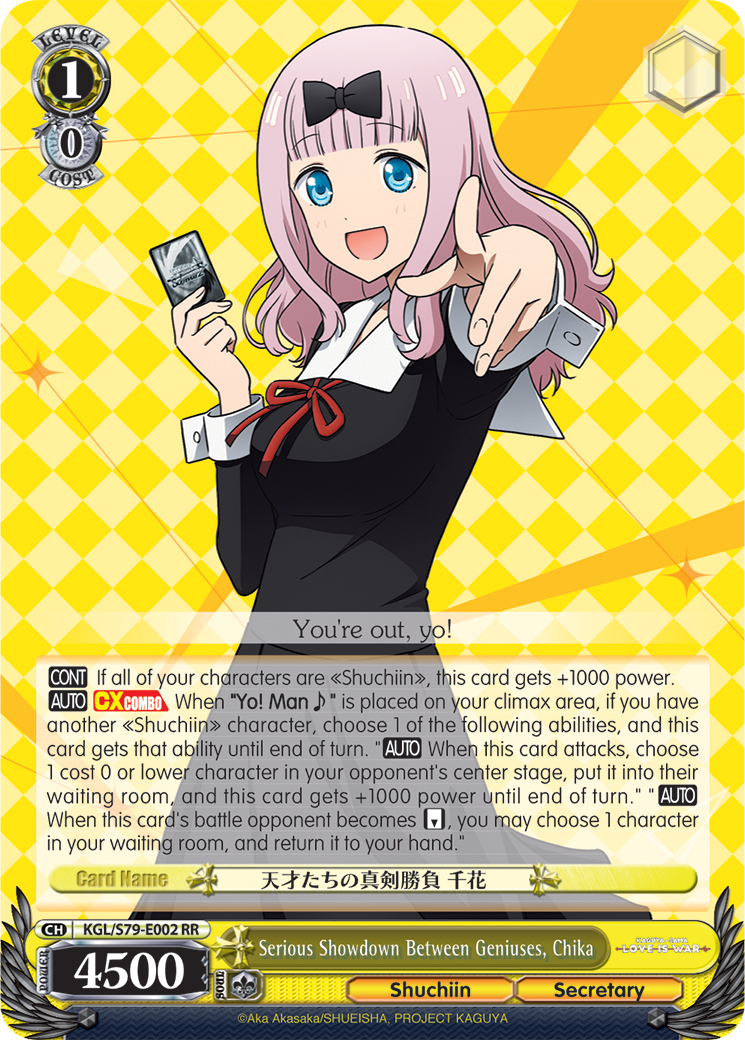 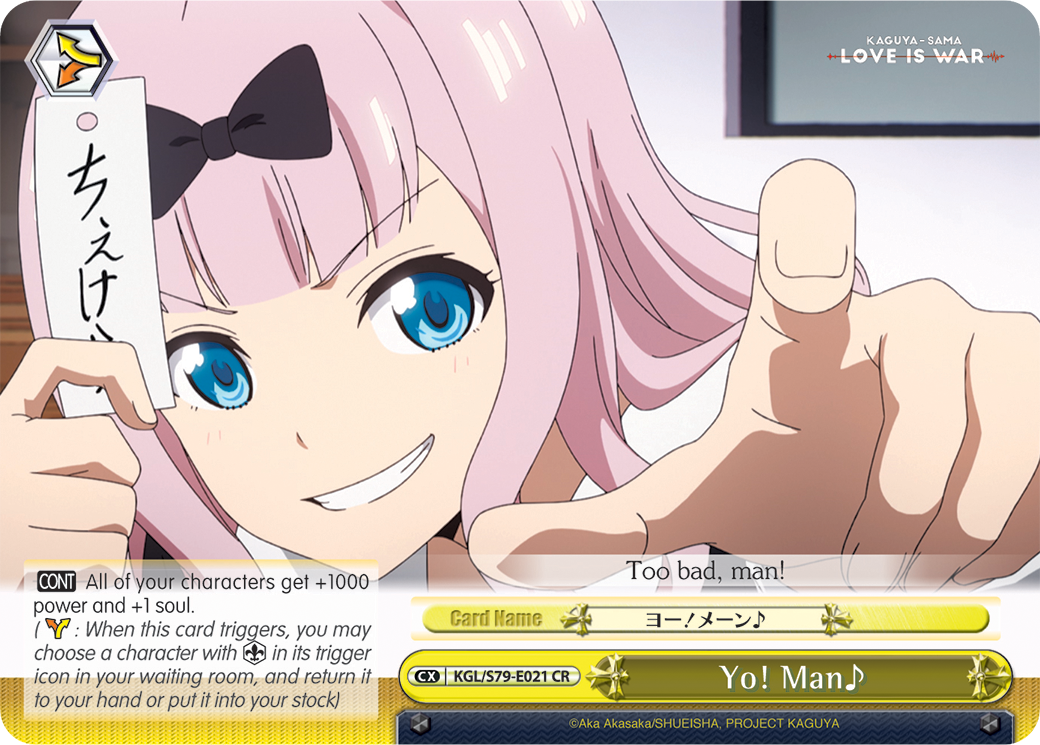 She gets an easy boost of +1000 power via her first ability, and her CX Combo offers great flexibility! You can opt to remove a key center character from your opponent’s field and get a further bump of +1000 power in the process, or retrieve a card from your waiting room at no cost by taking down a weaker opposing character!

One of the main characters in the anime series, Miyuki is the President of the Student Council at Shuchiin Academy. Despite being the top student in school, he struggles to hide his weakness in sports, as recreated in his CX Combo, A Man’s Dignity, Miyuki and President’s Pride. 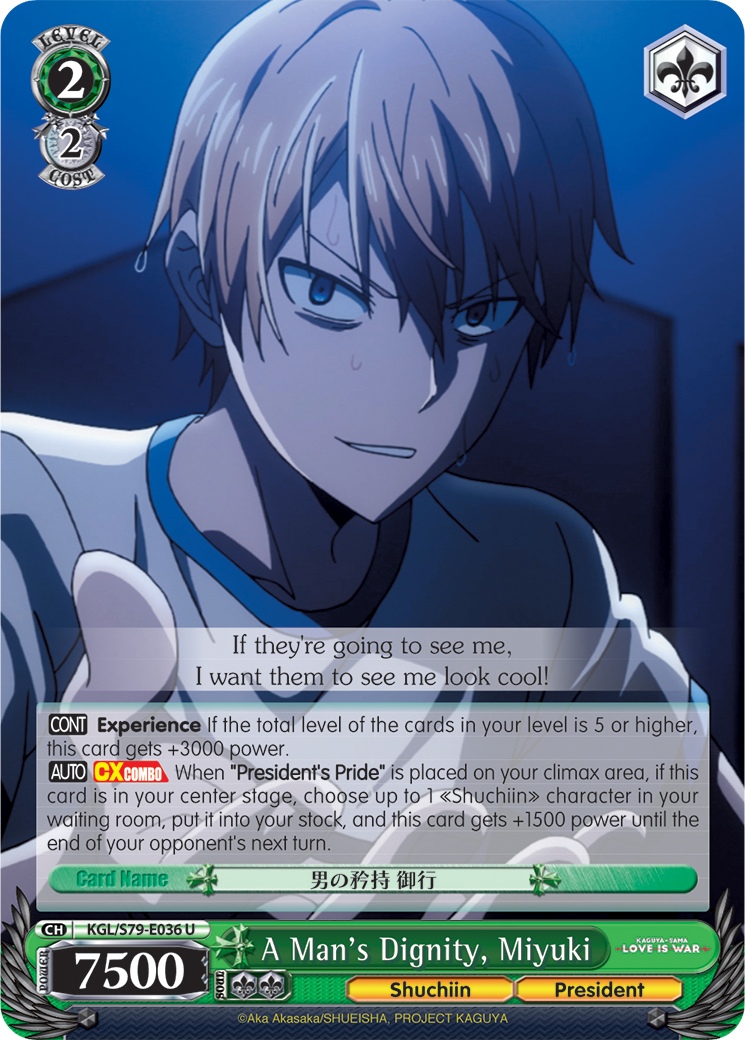 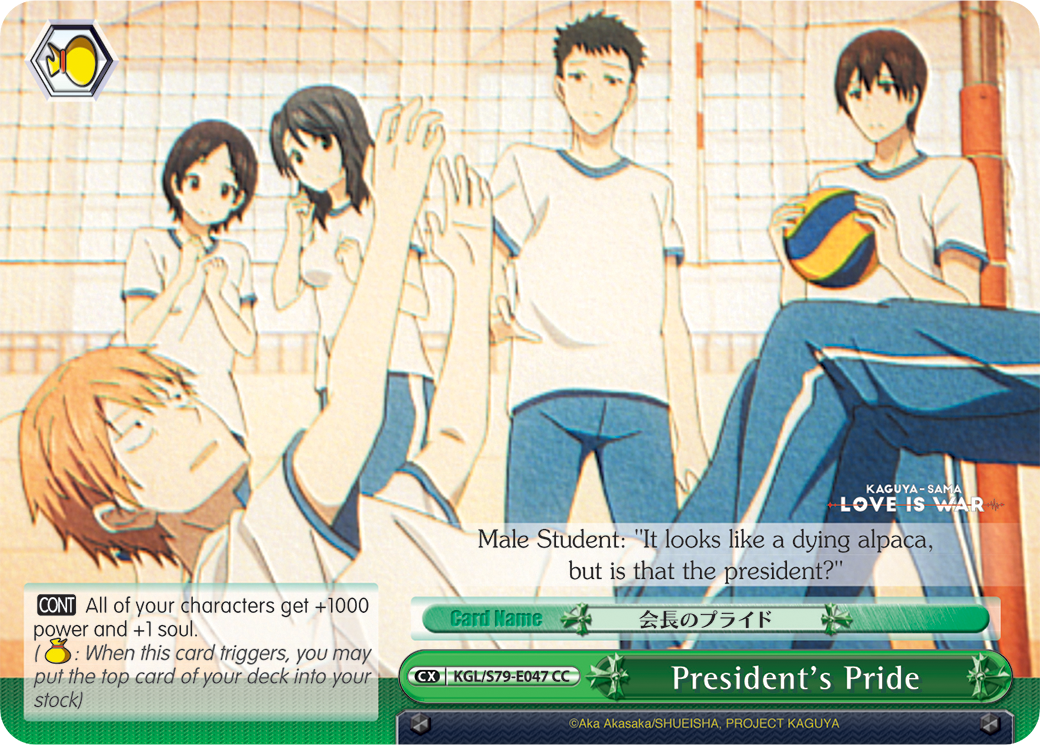 The Experience ability enables him to reach 10500 power and the CX Combo increases that further to 12000 power without any support from other characters on the back stage! In addition, the CX Combo adds 1 stock, refunding part of the cost for playing him on the field.

The titular character of the series, Kaguya is the Vice President of the Student Council at Shuchiin Academy. Despite being an all-rounded genius, she is in reality, a quintessential sheltered girl due to her wealthy upbringing so she can be a bit naïve and ignorant at times. Her strong 3/2 CX Combo, Serious Showdown Between Geniuses, Kaguya and Exchange Party Aftermath will give you an extra edge in your late game! 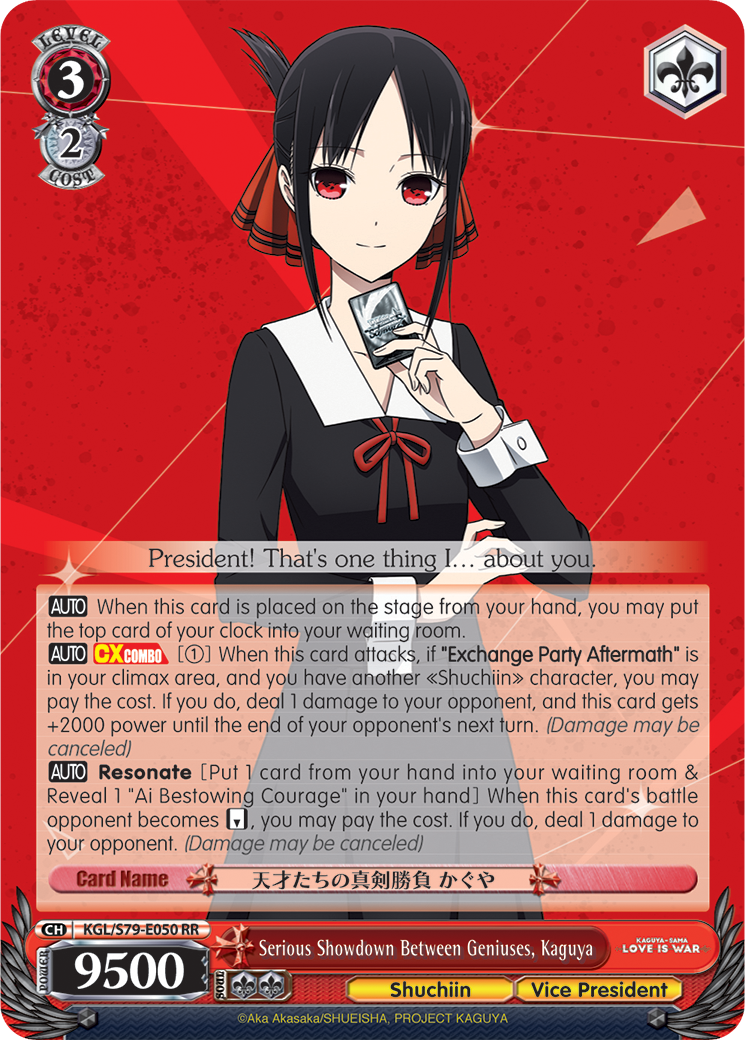 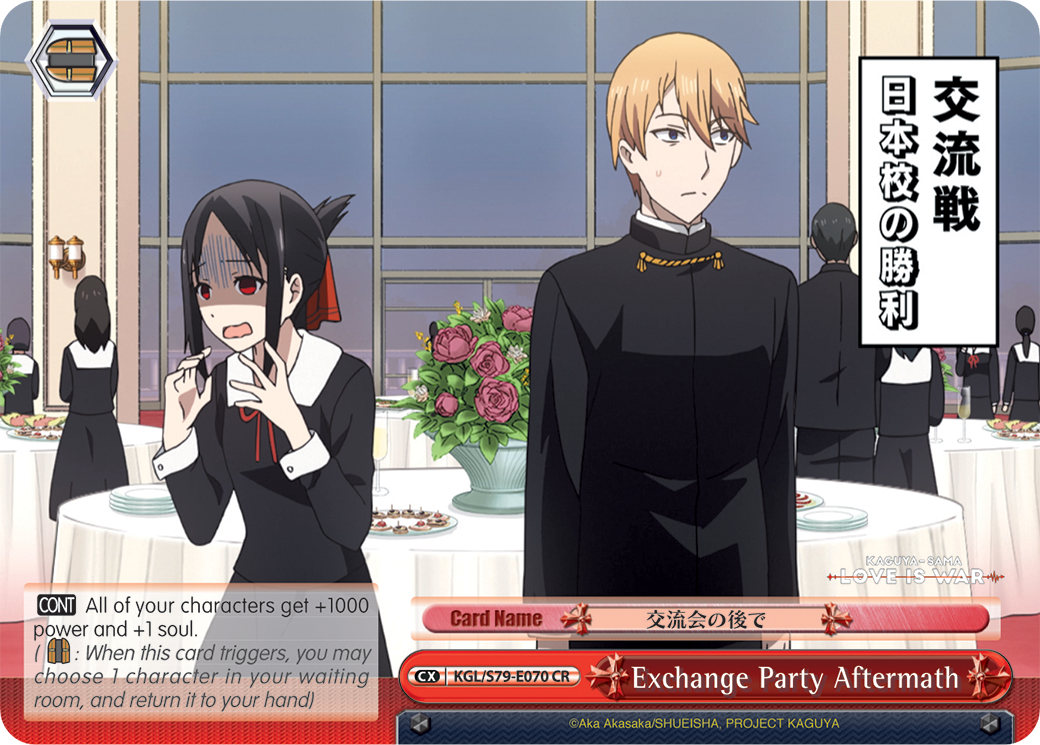 Besides being able to deal 2 damage on her own, the CX Combo enables Kaguya to deal an additional damage while gaining +2000 power until the end of your opponent’s next turn for a defensive purpose. In addition, the Resonate ability allows her to deal 1 damage even when it’s not your turn! 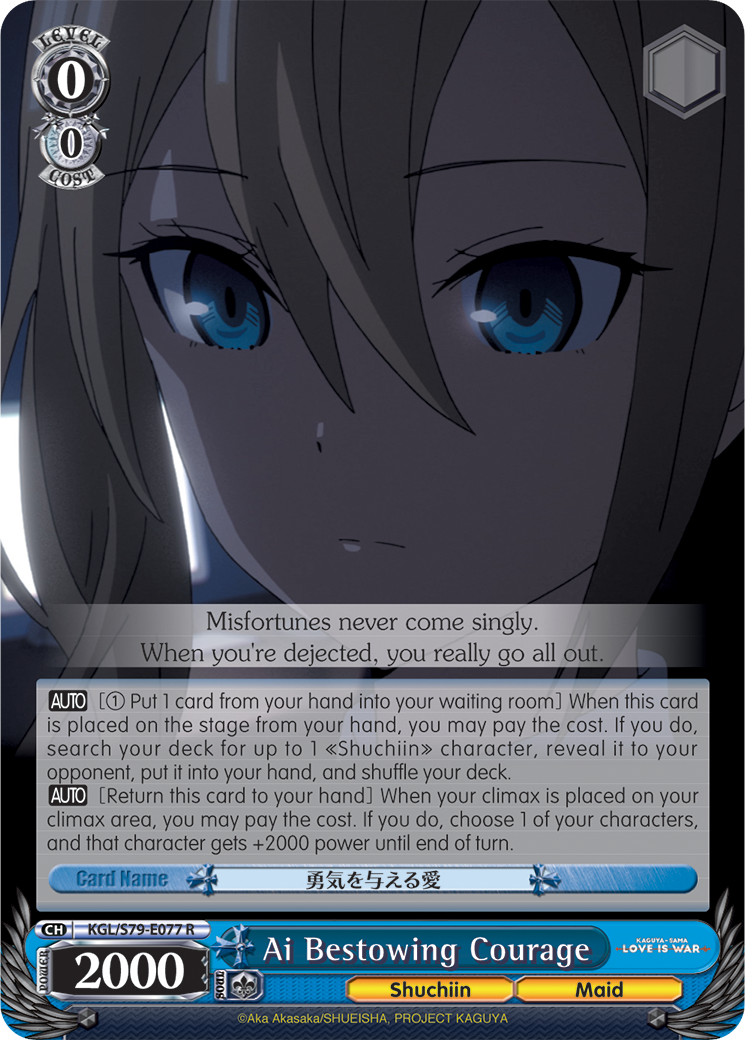 Another card that works well with the above CX Combo is the character card, Ai Bestowing Courage.

With her first ability, you can search for another character in your early game, then have her returned to your hand with her second ability to set up for Kaguya’s Resonate ability or to reuse her first effect.