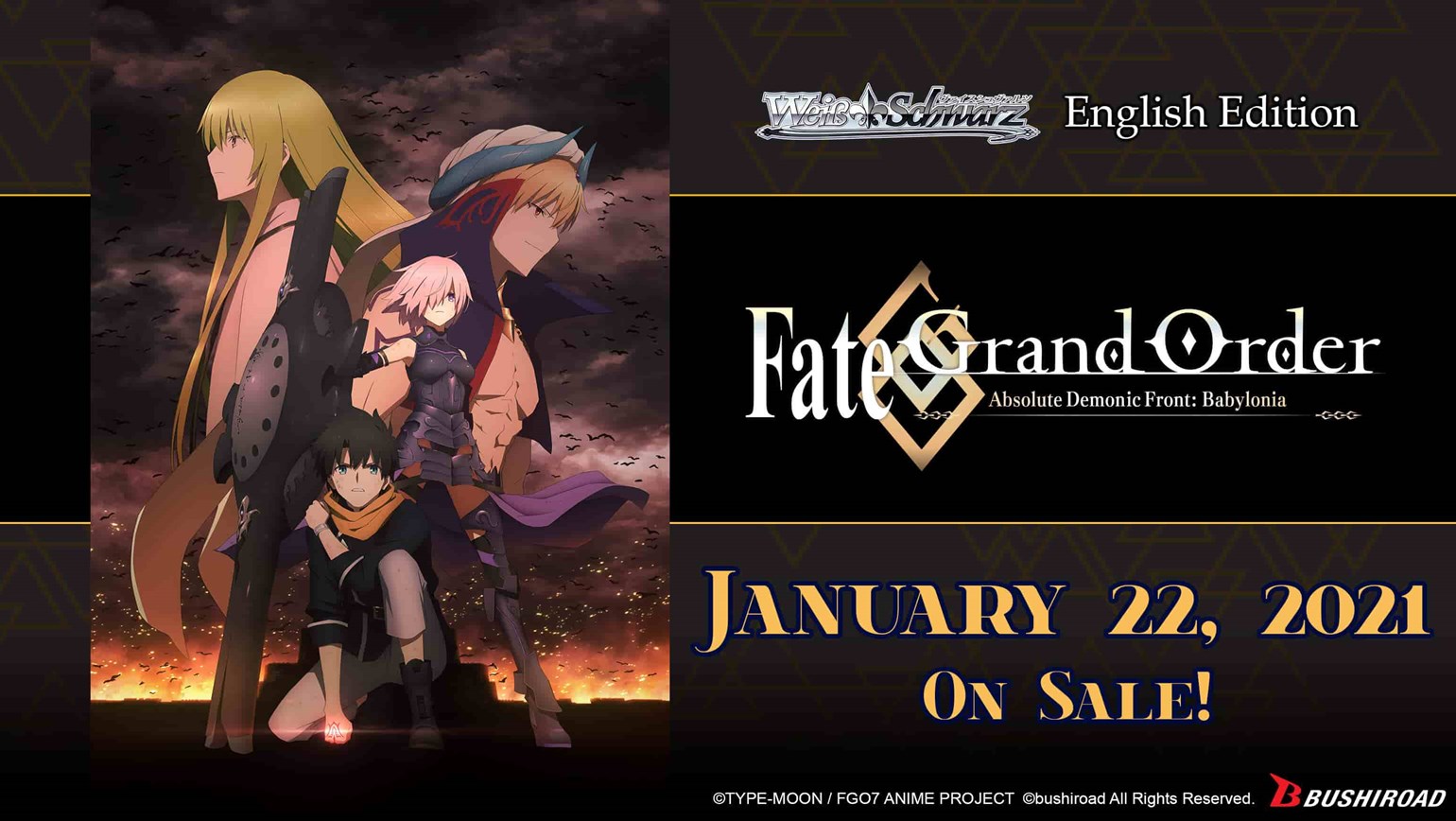 On January 22nd, a new title Fate/Grand Order Absolute Demonic Front: Babylonia will be joining Weiss Schwarz English Edition, with the release of a Trial Deck+ and Booster Pack! The anime series which was adapted from the Babylonia quest in the popular Japanese mobile game Fate/Grand Order, aired from October 2019 to March 2020 and was streamed on several services across several countries. This set based on the series, features the protagonist Ritsuka Fujimaru and his demi-servant Mash Kyrielight, alongside other characters such as Gilgamesh, Kingu and Ereshkigal.

Check out the strong 3/2 CX Combos that can be found in this set!

Resembling a monstrous creature with purple hair composed of snakes, Gorgon seeks to eradicate humanity as depicted in her character card, The Goddess of Revenge, Gorgon and her CX Combo, Enormous Size and Strength. 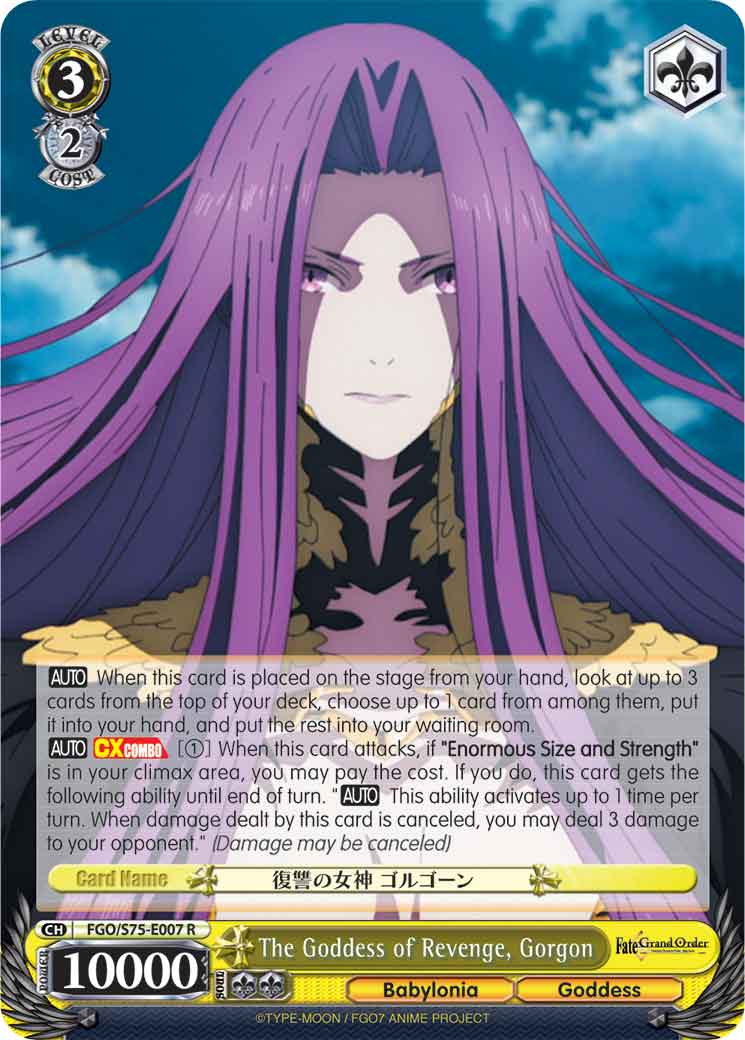 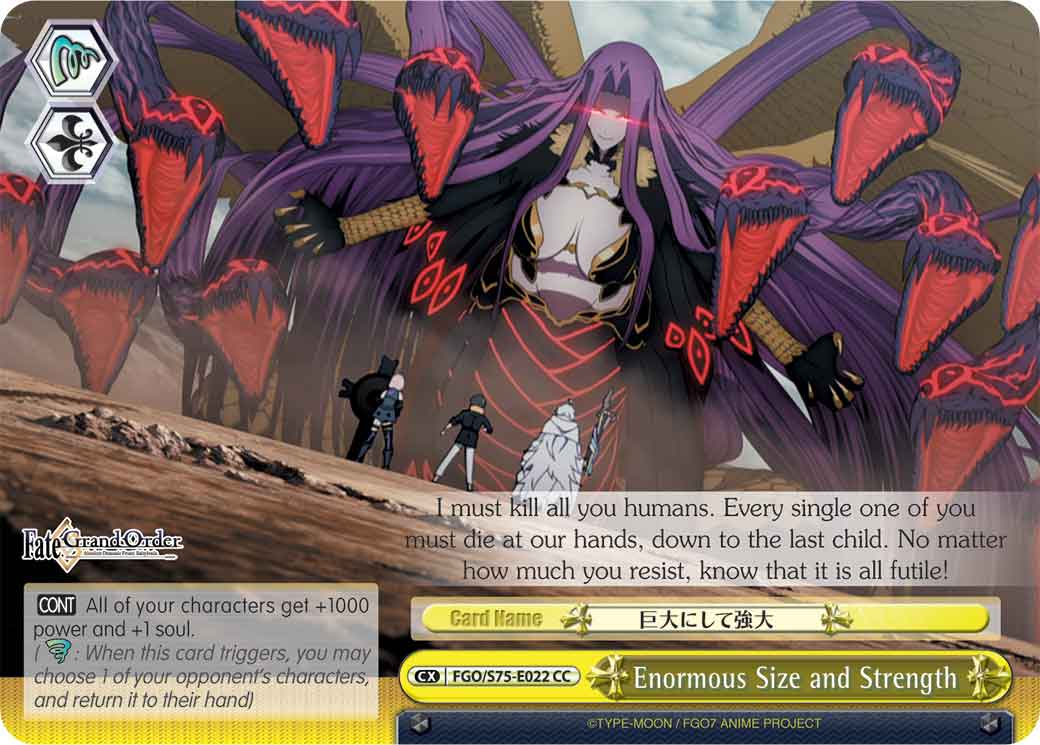 Her first AUTO ability offers functionality that allows you to dig up to 3 cards into your deck for any card you need, depending on your board state.

With the AUTO ability gained via her CX Combo, you can continue to deal 3 damage, in the event the damage dealt during her initial attack is canceled.

The wise King of Uruk Gilgamesh rules his people with austerity and will go to any lengths to protect his land. His character card, Time for the Final Battle, Gilgamesh and his CX Combo, The Will of Uruk to Continue Fighting is a fine testimony to that. 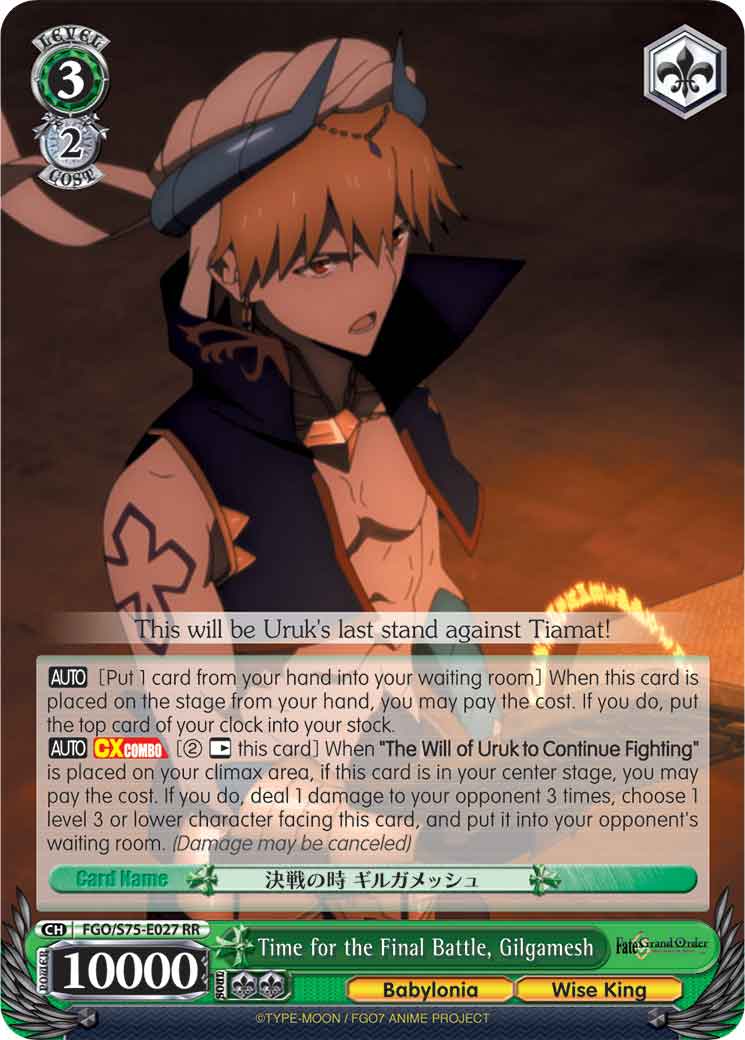 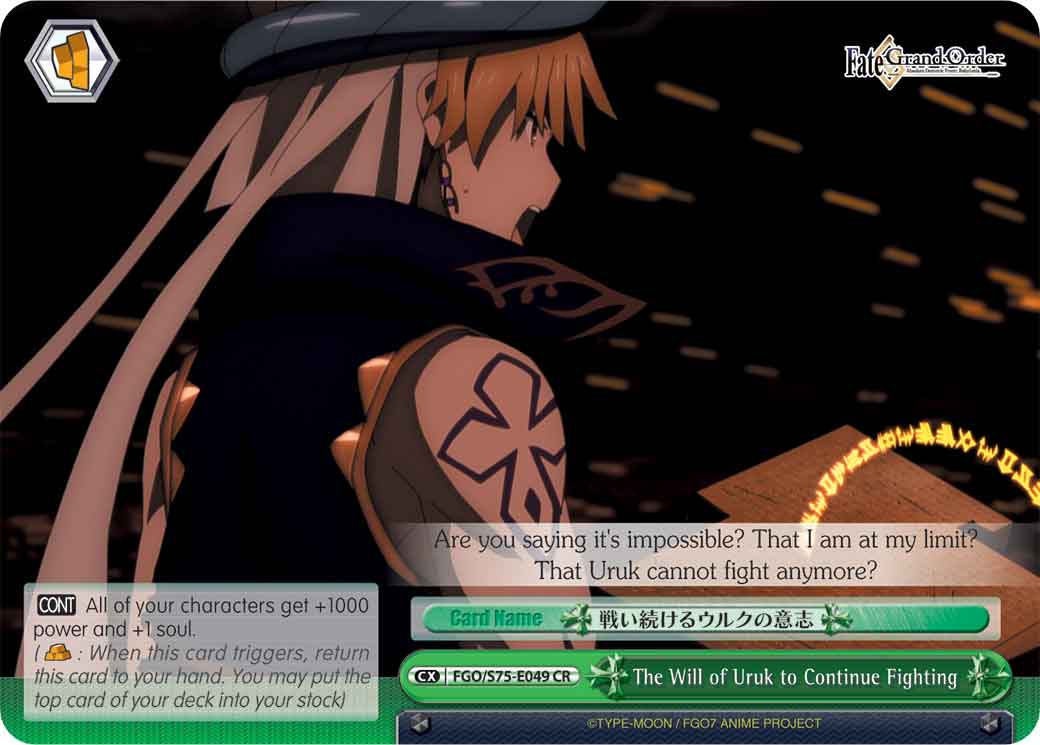 On its own, the character card allows you to heal 1 damage to stock by discarding a card.

With his CX Combo, he unleashes an onslaught of 3 additional damage before taking down one of his opponent characters, by sending them straight to the opponent’s waiting room.

As a goddess with a fiery temper, Ishtar is a strong contender in any battle and a powerful game-finisher, as exemplified by her character card, Goddess Who Rules Over Venus, Ishtar and her CX Combo, Final Battle with Mother! 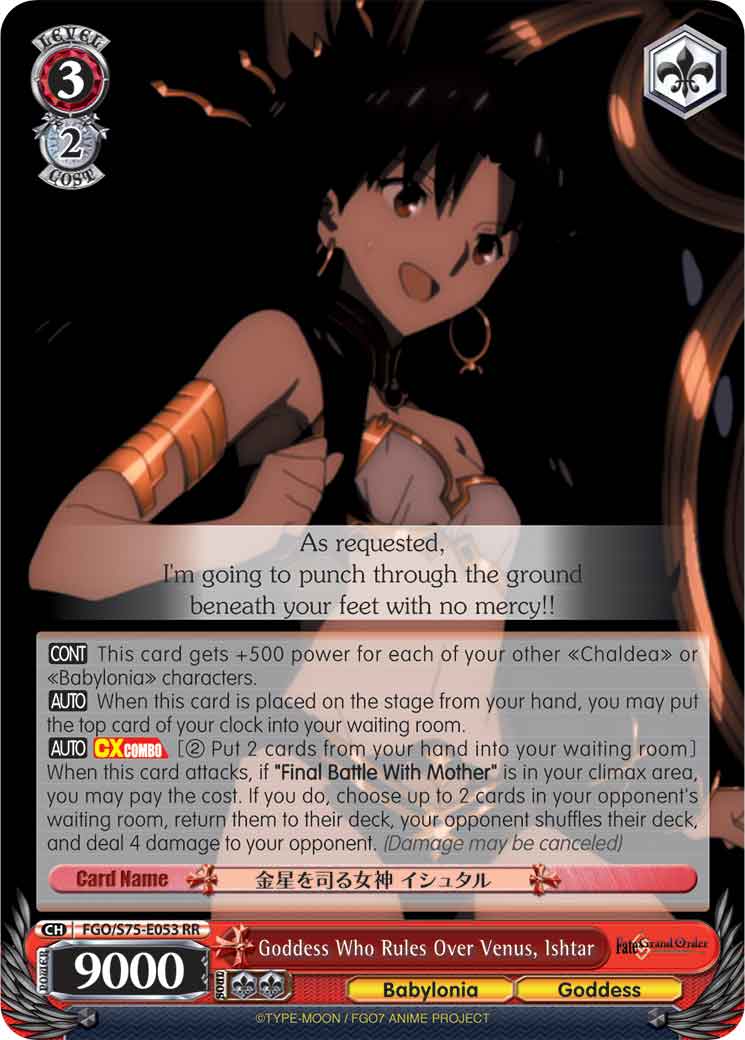 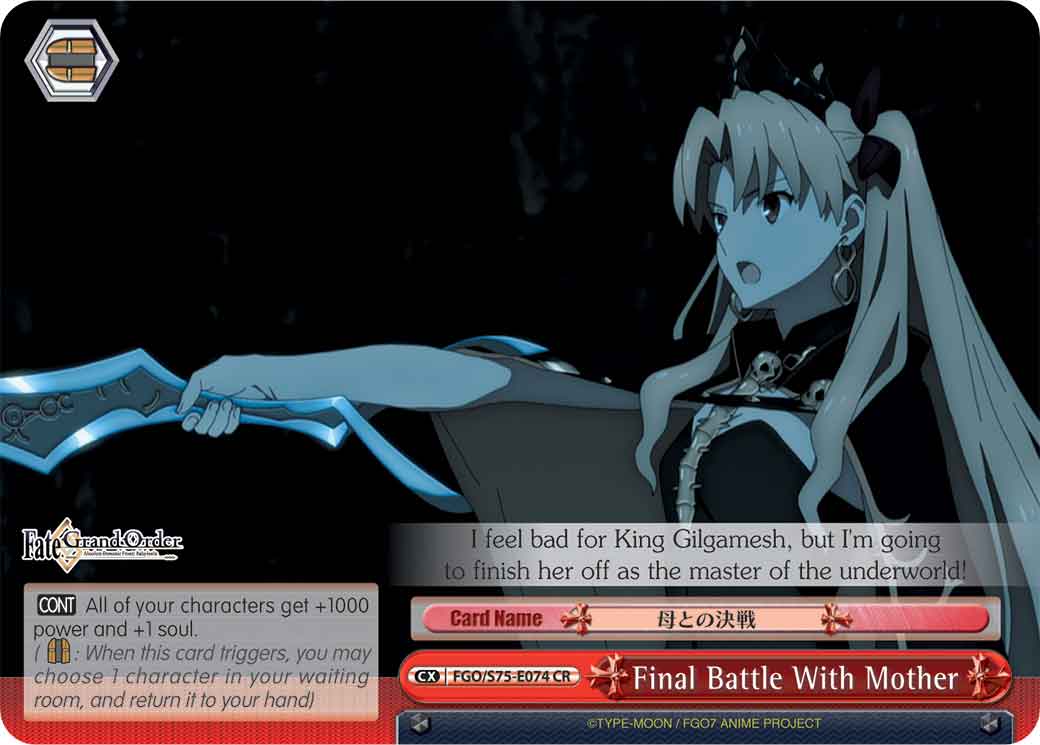 On her own, Ishtar draws strength from other Chaldea or Babylonia characters on the field and gets a power bump of up to +2000 while healing 1 damage, by the effects of her first two abilities.

With the AUTO ability gained via her CX Combo, you get to shuffle cards back to your opponent’s deck before unleashing an onslaught of 4 additional damage to the latter.