It’s that time again! Welcome to Bulk Bin Bargains #4. When buying and selling in large quantities (often referred to as “bulk”) it can be incredibly frustrating to identify which cards are worth pulling out to sell individually. This article is the latest addition to a series of guides that are meant to help Bulk Box enthusiasts know which cards to look for when sifting through commons and uncommons. In today’s publication we are going to discuss common and uncommon cards above $2 that were printed in the various “Masters” sets, starting with Modern Masters which was released in 2013 to Double Masters which was released in 2020. This article will also cover cards in the Modern Horizons, Modern Horizons 2, and Time Spiral: Remastered sets as well!

Delving into the commons and uncommons contained in the first masters set, “Modern Masters,” the highest value goes to the card titled Emblem - Elspeth, Knight-Errant. Elspeth, Knight-Errant, also printed in Modern Masters, has an ability that creates an Emblem that gives your creatures, artifacts, enchantments, and lands indestructible for as long as the emblem is in play. As of the writing of this article, there are still no ways to interact with Planeswalker Emblem Tokens. Having a physical Emblem token your opponent can’t interact with in any way is clearly something buyers want to add to their collections based on the above $8 price tag that this card lists for currently! Other notable commons and uncommons from this set include Paradise Mantle, Manamorphose, Path to Exile, Relic of Progenitus, Eternal Witness, Street Wraith, Lava Spike, Spellstutter Sprite, Faerie Rogue Token (Blue/Black), Mind Funeral, and Kodama’s Reach. 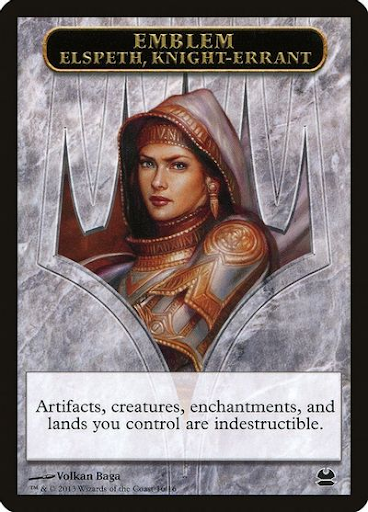 Next up we have: Modern Masters 2015! The card with the highest overall value in the commons and uncommons of this set is Eldrazi Temple. This is a non legendary land that allows a player to play early game Eldrazi like Eldrazi Mimic, Thought-Knot Seer, and Matter Reshaper much faster than if you were using basic lands. The ability to play and keep more than one copy of this land in play at one time makes it a powerful accelerant that is advantageous in the early game and late game alike. Modern Masters 2015 has other bulk bin bargains including Remand, Dismember, Wayfarer's Bauble, Mutagenic Growth, Lightning Bolt, Expedition Map, and Thrull Token. 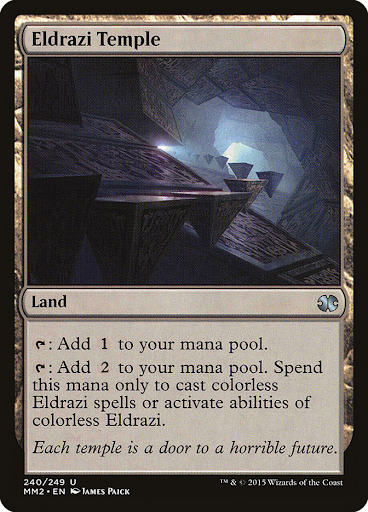 The next set, Modern Masters 2017, was released after the set Eternal Masters (spoiler, this set is next up after this one!) but in writing this article I am grouping the 3 “Modern Masters” sets together because that’s how I like it! Feel free to skip ahead to the next paragraph and come back to this one afterwards if you’d like to read this article in chronological order. The highest value card in Modern Masters 2017 is Path to Exile. Path is a multi-format staple, seeing play in Modern, Legacy, Cube, and Commander. Even with many reprints of this card, player interest level in this one-mana removal spell keeps it in demand as an efficient removal spell for most creatures. The commons and uncommons also above $2 in this set are Inquisition of Kozilek, Wurm Token, Serum Visions, and Dimir Signet. Dimir Signet is part of the “Signet Cycle” which includes one Signet for every guild on the plane of Ravnica. These signets are a popular choice in multi-colored commander decks and are generally good to pull out for selling or trading. 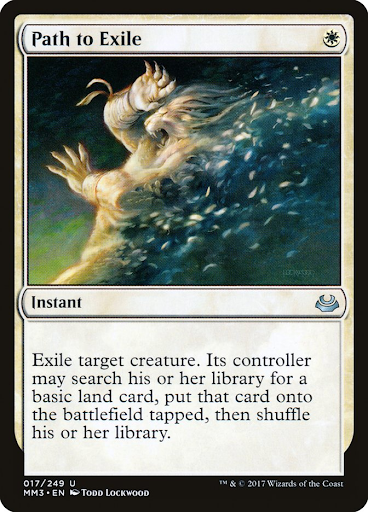 Ashnod’s Altar is the highest value common or uncommon from the set Eternal Masters, the next Masters set being covered in this article. This card serves as a method to generate a large or potentially infinite amount of colorless mana when used in combination with Sword of the Meek and Thopter Foundry, for example. The remaining above $2 commons and uncommons from Eternal Masters include: Blood Artist, Relic of Progenitus, Night’s Whisper, Animate Dead, Pyroblast, Wirewood Symbiote, Swords to Plowshares, Peregrine Drake, Chain Lightning, Bloodbraid Elf, Price of Progress, Honden of Cleansing Fire and Honden of Seeing Winds. There are other cards that are a part of the Eternal Masters “Honden Cycle” which are still worth pulling out of your bulk collections for trading and or selling. If someone is looking for one Honden card there is a good chance they might need some more of these cards to finish their deck and/or collection. 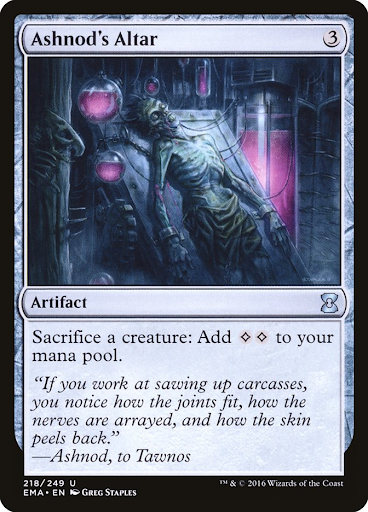 The next set that is being reviewed is Iconic Masters. Mishra’s Bauble takes home the award for highest value common or uncommon from this particular set. This card is used in formats like Modern, Legacy, and Commander. A 0-mana artifact that has the ability to turn on Metalcraft or Delirium that replaces itself after you sacrifice it are some of the key functions for why this card is so desirable for some strategies. Commons and uncommons worth keeping are Dragon Tempest, Mindcrank, Thran Dynamo, Windfall, Swords to Plowshares, and Monastery Swiftspear.

When looking through the commons and uncommons from Masters 25, the highest value card to look out for is Utopia Sprawl. This card allows decks like Gruul Land Destruction to ramp out a turn two Stone Rain or Blood Moon, which can be backbreaking in eternal formats that value non basic lands highly. Utopia Sprawl is a mana efficient way of generating value in enchantress style strategies, which usually stock up on a variety of ways to draw cards or generate other value any time an enchantment is played or cast. Cards also worth keeping an eye out for in Masters 25 include Red Elemental Blast, Freed from the Real, Fish // Kraken Double-sided Token, Street Wraith, Kobolds of Kher Keep Token (010), Swords to Plowshares, Lightning Bolt, Boros Charm, Relentless Rats, and Swiftfoot Boots. 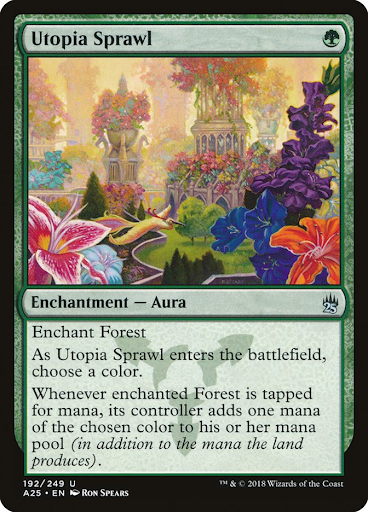 Ultimate Masters has a few desirable cards, but none of them individually stand out as the most expensive by a large margin. The most expensive bulk bin bargain from this set is Buried Alive, an uncommon that allows you to search your library for up to three creature cards and put them into your graveyard. This has high synergy in reanimator strategies or for putting cards with abilities into your graveyard, such as the card Brawn for example. Commons and uncommons to look out for while sorting through Ultimate Masters include Laboratory Maniac, Eternal Witness, Chainer’s Edict, Lava Spike, Devoted Druid, and Anger. 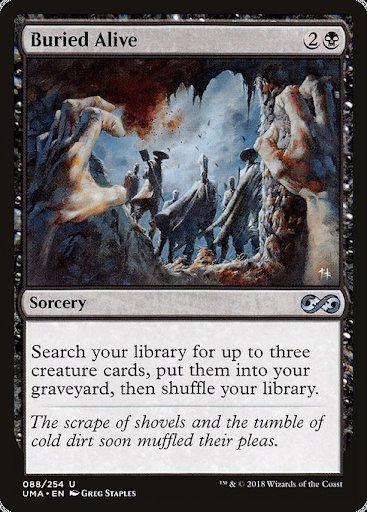 Moving on to Double Masters, we get another printing of Mishra’s Bauble that is sitting at the most valuable common or uncommon spot. This set also offers us valuable commons and uncommons in the form of Lightning Greaves, Manamorphose, Path to Exile, Fatal Push, Basalt Monolith, Springleaf Drum, Pongify, Wurm (029) Token, Wurm (030) Token, Forest (381), and Swamp (377). The Forest and Swamp mentioned prior are a part of a “Full Art Land Cycle” that includes two basics for each basic land type. All of the basic lands from this set are Full Art versions. 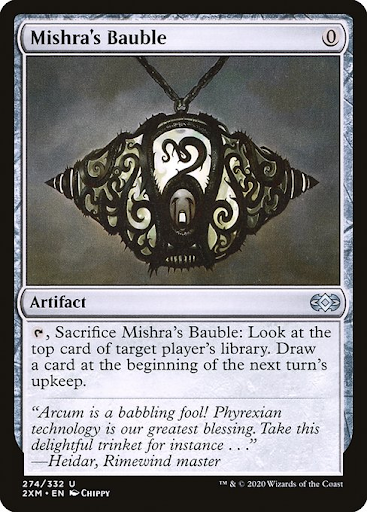 Modern Horizons offered a new level of competitive play for Eternal formats like Modern, Legacy, and Vintage upon its release. Most of this power level push came from new rare/mythic cards printed in the set, but several older cards that had not been legal in Modern previously were also introduced into the format with Modern Horizons. The commons and uncommons are currently not reflective of this power level push from the set, as most of the expensive cards from the bulk are tokens! Elemental (009) // Goblin Double-Sided Token is the most expensive of the Modern Horizons bulk, although with an average price of $34.99 at the moment, I’m not sure we can still call this card “bulk” anymore! The other cards worth pulling out of your Modern Horizons commons/uncommons are Elemental (008) // Emblem - Wrenn and Six (021) Double-sided Token, Marit Lage // Zombie Double-Sided Token, Shapeshifter (001) // Emblem - Serra the Benevolent (020) Double-sided Token, Generous Gift, Talisman of Conviction, and Talisman of Hierarchy. The two aforementioned Talisman cards are part of a “Talisman Cycle” printed in Modern Horizons. The next set discussed in this article, Modern Horizons 2, reprinted this cycle of Talismans featuring a Retro Frame. These cards come in retro frame, retro frame foil, and retro frame etched foil versions. 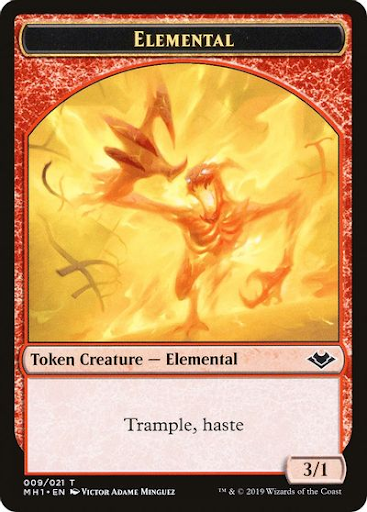 Above is the front side and below is a look at the back side! 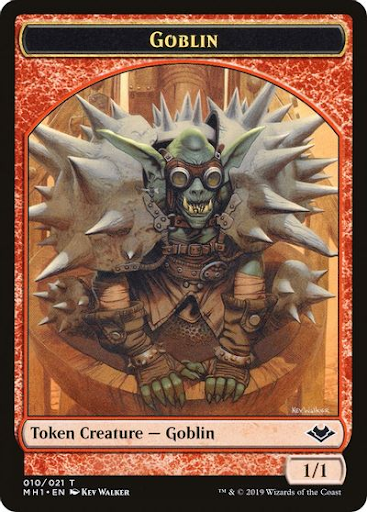 Modern Horizons 2 has a few cards in it to keep an eye out for in your commons and uncommons, with the most expensive one being Prismatic Ending (Retro Frame). The normal printing of Prismatic Ending is also worth pulling out, in addition to Dragon’s Rage Channeler and Tireless Provisioner. 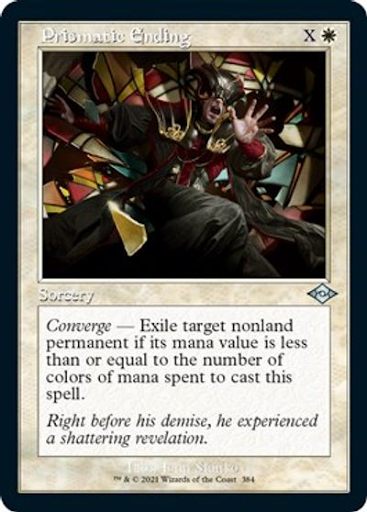 Time Spiral: Remastered only has two uncommons worth pulling: Street Wraith and Pongify. However, there are also a few  cards that have been printed in retro frames that have previously been common or uncommon prior to this version. Several of these cards are worth pulling out, should you find them in bulk bins! The most expensive retro frame reprint in this category is Ponder. The rest of the cards worth pulling out are Path to Exile, Eternal Witness, Vandalblast, Dismember, Remand, Monastery Swiftspear, Laboratory Maniac, Lava Spike, Bojuka Bog, Wastes, Mystic Sanctuary, Field of Ruin, Bloodbraid Elf, Beast Within, Nature’s Claim, Farseek, Elvish Mystic, Dovin’s Veto, Young Pyromancer, Mulldrifter, Gray Merchant of Asphodel, Relentless Rats, and Sanguine Bond. 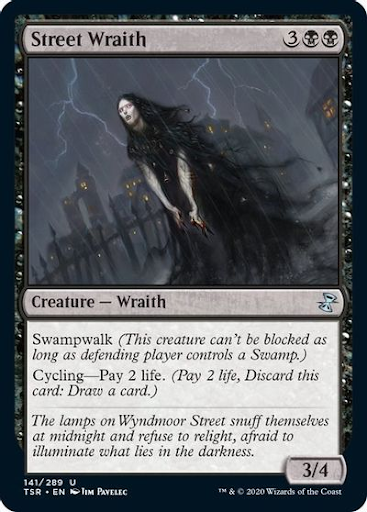 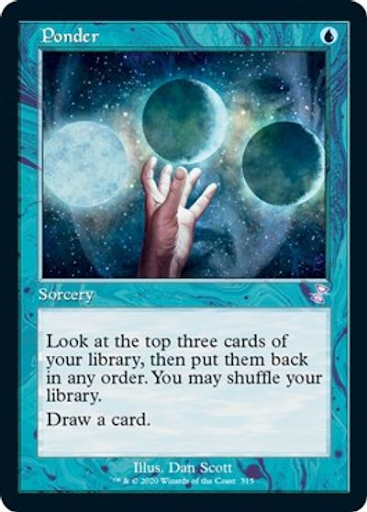 Antonio Espada works in the TCGplayer Fulfillment Center, and works hard to create the best experience for buyers and sellers in the gaming industry. In his time away from TCGplayer, you can find him working with the BeardFishGaming Inventory, or gaming with his family and friends.